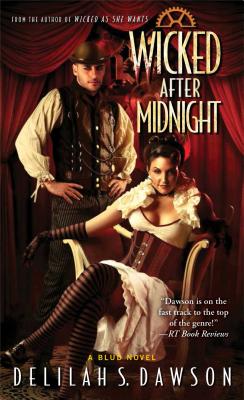 Wicked After Midnight (A Blud Novel #6)

A contortionist and a rakish brigand navigate the cabarets of Paris to rescue a girl taken by slavers in the third steampunk-tinged romance of the Blud series.

An electrifying paranormal romance . . . with a twist!

Only rebellious Demi Ward could be bored with her life as a contortionist in Criminy Stain’s magical traveling circus. But being a cabaret star in the City of Light is dangerous . . . especially for an audacious Bludman.

After Demi’s best friend, Cherie, is brutally kidnapped en route to Paris by a roving band of masked slavers, passionate highwayman Vale Hildebrand shows up to save the day. With his help, Demi rises to the top of the cabaret scene as part of her plot to find Cherie—but what she really discovers is a taste for Vale’s kisses. Meanwhile, wealthy suitors vie for a night of her charms, crowding the glittering club where Demi commands the stage with a host of colorful daimons. She is soon seduced by a smoldering portrait artist whose ties to a secret society could be the break she and Vale need on their hunt. But—unlike the Paris that Demi read about in college on Earth—the Paris of Sang is full of depraved pleasures and deadly surprises. . . .