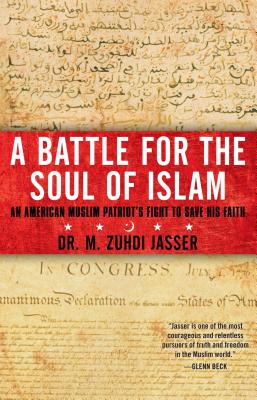 A Battle for the Soul of Islam

An American Muslim Patriot's Fight to Save His Faith

Can a Good Muslim Be a Good American?

Among the unsettling social shifts in the wake of 9/11 was a division here in the United States, often sadly along party lines, between those who believed every Muslim was a potential threat and those who believed no Muslim could do wrong. In a compelling and balanced must-read, “one of the most controversial Muslims in the United States” (Jerusalem Post)—a recognized expert on terrorism and a patriotic American—lays bare the crucial differences between Islam and the spiritual cancer known as Islamism and persuasively calls for radical reformation within the Muslim community in order to preserve liberty for all.

Praise For A Battle for the Soul of Islam: An American Muslim Patriot's Fight to Save His Faith…

"Zuhdi Jasser is a brave American patriot, a faithful Muslim and a good man. Dr. Jasser's Battle for the Soul of Islam proposes a cure for one of the greatest problems facing the world today: the violence and extremism of radical Islam." --Mark R. Levin, New York Times bestselling author of Ameritopia

"Dr. Jasser is one of the most courageous and relentless pursuers of truth and freedom in the Muslim world. Battle for the Soul of Islam takes you beyond the sound bites to show you what it really means to be a moderate Muslim fighting against those who have perverted your religion.” --Glenn Beck, New York Times bestselling author of Being George Washington


"Dr. Jasser is an American hero in the war radical Islam has declared on us. Whether we prevail in this long war may very well depend on how closely we listen to him." --William J. Bennett, New York Times bestselling author of The Book of Man and former US Secretary of Education

Dr. M. Zuhdi Jasser is the founder and president of the American Islamic Forum for Democracy (AIFD). Dr. Jasser is a first generation American Muslim whose parents fled the oppressive Assad regime of Syria in the mid-1960s for American freedom. A devout Muslim, Dr. Jasser founded AIFD in the wake of the 9/11 attacks as an effort to provide an American Muslim voice advocating for the preservation of the foundation principles of the United States Constitution, liberty and freedom, and the separation of mosque and state.
Loading...
or
Not Currently Available for Direct Purchase