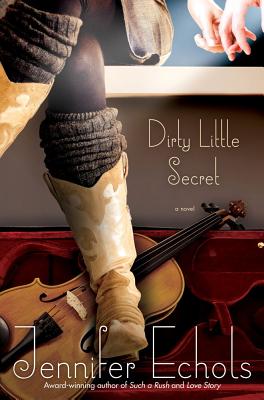 From the author of the “real page-turner” (Seventeen) Such a Rush comes an unforgettable new drama that follows friends-turned-lovers as they navigate the passions, heartbreaks, and intrigue of country music fame.

I was being given the chance to do the one thing I wanted most in the world. The chance was presented to me by a guy so gorgeous, he turned my skin to fire when he touched me. And joining a band was the one thing I was most forbidden to do, the thing that would ruin my future forever.

There are too many secrets in eighteen-year-old Bailey’s life. Not just the obvious one: that she told her grandfather she was going on a date, and instead is playing fiddle in a Nashville bar. There’s all the stuff that makes it worse. Like how her younger sister, Julie, was offered a recording contract, and her family is terrified that Bailey is going to mess the deal up. Like the way that Bailey has been acting out. Like the way they’re all mad at her, even Julie.

Bailey’s parents don’t want her playing any gigs at all, but when they leave her with her grandfather in Nashville for the summer so they can tour with Julie, he lands her a music job that’s beneath the radar, playing old country songs in cheesy costumes at a local mall. That’s where she meets Sam. . . .

Sam’s got big plans that don’t include playing backup while his alcoholic dad scratches out a living as a Johnny Cash soundalike. He intends to take his high school garage band to the big time, and as soon as he hears Bailey play, he knows she’s just what he wants. That really ticks off Charlotte, the drummer for the band and Sam’s ex-girlfriend, while bassist Ace just wants to keep everyone happy.

Bailey isn’t at all sure where she stands with this boy who has a lust for music and life, and who may or may not have a lust for her. Something tells her that with Sam, there could always be a catch. And yet, suddenly, her life is no longer about what might have been, and a whole lot about where she will choose to go.

Jennifer Echols was born in Atlanta and grew up in a small town on a beautiful lake in Alabama—a setting that has inspired many of her books. Her nine romantic novels for young adults have been published in seven languages and have won the National Readers’ Choice Award, the Aspen Gold Readers’ Choice Award, the Write Touch Readers’ Award, the Beacon, and the Booksellers’ Best Award. Her novel Going Too Far was a finalist in the RITA and was nominated by the American Library Association as a Best Book for Young Adults. She lives in Birmingham with her husband and her son. Visit her at Jennifer-Echols.com.
Loading...
or
Not Currently Available for Direct Purchase