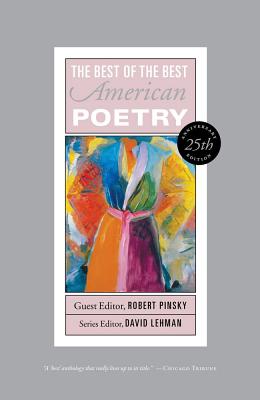 Best of the Best American Poetry

Robert Pinsky, distinguished poet and man of letters, selects the top 100 poems from twenty-five years of The Best American Poetry

THIS SPECIAL EDITION CELEBRATES twenty-five years of the Best American Poetry series, which has become an institution. The Best American Poetry is the most prestigious poetry publication in the United States and has been so almost from its inception in 1988. Hotly debated, keenly monitored, ardently advocated (or denounced), and obsessively scrutinized, every volume in the series consists of seventy-five poems chosen by a major American poet—from John Ashbery in 1988 to Mark Doty in 2012, with stops along the way for such poets as Jorie Graham, Charles Simic, A. R. Ammons, Louise Glück, James Tate, Adrienne Rich, Paul Muldoon, Billy Collins, Heather McHugh, and Kevin Young.

Out of the 1,875 poems that have appeared in The Best American Poetry, here are 100 that Robert Pinsky, the distinguished poet and man of letters, has chosen for this milestone edition. Each volume in the series is represented, and the result is a pleasure-giving book of twice-honored poems that readers will find indispensable. The Best of the Best American Poetry is proof positive that the art form is flourishing. The volume is a reminder, too, of the role this anthology series has played in the resurgence of interest in American poetry in the last quarter century.

With dazzling introductory essays by guest editor Robert Pinsky and series editor David Lehman, The Best of the Best American Poetry includes up-to-date biographies of the poets, along with the comments they made when the poems were originally selected. This is an invaluable addition to the cherished series.

“The strength of [The Best of the Best American Poetry] is its sense of subjectivity, the way these poems illustrate their editor’s aesthetic, and in so doing, tell us something of how poetry operates in the world…These are poems that take the personal and make it universal, not by grand statements but by specific observation, building a common vision out of the very things that hold us apart.”
— David Ulin

“A concentrated, high-caliber, and exhilarating overview of the intensity and artistry that have made American poetry so splendidly varied and vital…This is an anthology of broad scope, serious pleasure, and invaluable illumination.”
— Donna Seaman

“This indispensable volume, with its rich mix of voices, forms and techniques, serves as a melting pot of contemporary American verse.”
— Julie Hale

“It takes special chutzpah and perspective to pick the poems that deserve to make the best cut twice—and Pinsky’s fine collection proves that he’s got the chops to do it…His selection is so rich and diverse one can’t help but find several poems that will brighten any winter day…The Best of the Best American Poetry is a collection that never stops bringing light.”
— Bruce Jacobs

“[A] survey of the past quarter-century of American verse…No doubt, some readers will discover new favorites here.”

Robert Pinsky was the nation’s Poet Laureate from 1997 to 2000. An acclaimed poet and scholar of poetry, he is also an internationally renowned man of letters. His Selected Poems was published in paperback in March 2012. His other books include The Sounds of Poetry: A Brief Guide and his bestselling translation The Inferno of Dante, which won the Los Angeles Times Book Award. He teaches at Boston University and is the poetry editor at Slate.
Loading...
or
Not Currently Available for Direct Purchase