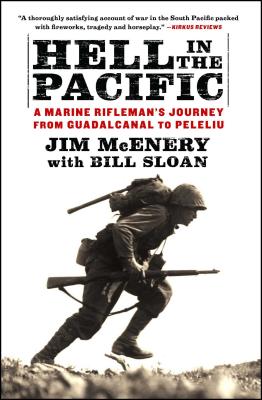 Hell in the Pacific (Paperback)

A Marine Rifleman's Journey From Guadalcanal to Peleliu

A no-holds-barred, brutally frank memoir about one Marine’s life on the front lines—and the sacrifices, suffering, and raw courage of the men in foxholes, locked in mortal combat with an enemy sworn to fight to the death.

A MARINE RIFLEMAN’S VIVID, BRUTALLY CANDID MEMOIR OF LIFE AND DEATH ON THEFRONT LINES OF WORLD WAR II IN THE PACIFIC

Jim McEnery’s rifle company—made famous by the HBO miniseries The Pacific—fought in some of the most ferocious battles of World War II. This unforgettable portrait of men at war is a chronicle of the sacrifices, suffering, and raw courage of those in the foxholes, locked in mortal combat with an implacable enemy.

Jim McEnery served in the 1st Marine Division’s famed K-3-5 rifle company in World War II and fought in three major campaigns against the Japanese. After the war, he moved to New Jersey and worked at Rutgers University until retirement. He passed away in September 2012.

Bill Sloan is a respected military historian and author of more than a dozen books, including Brotherhood of Heroes: The Ultimate Battle. He lives in Dallas, Texas.
or
Not Currently Available for Direct Purchase
Copyright © 2020 American Booksellers Association