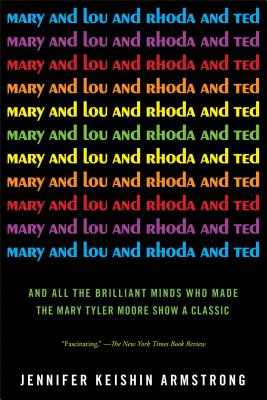 In this “fast-paced and charming…absorbing cultural history” (Publishers Weekly), Jennifer Keishin Armstrong presents an engaging behind-the-scenes look at the making of a classic and groundbreaking TV show that defined the sitcom genre and revolutionized the way women were portrayed on television, as experienced by its producers, writers, and cast.

“A delightfully thorough history of the show, evoking in detail the making of a piece of pop-culture history and telling sweet tales about the colorful cast. But what really jumps from the page is the story of the women in the writers’ room.”
— New York Daily News

“A superb, highly entertaining history of one of television's most beloved sitcoms… A terrific pop culture history--well-written, lovingly researched and chock full of great stories from the Mary Tyler Moore Show set.”
— Shelf Awareness for Readers

“Compelling and highly readable, this book is as informative as it is charming…As enjoyable as reruns of the classic show.”
— Bust

"Armstrong takes us back to a golden age of comedy."
— Washington Post

“Goes behind the scenes to reveal the often-bumpy creation of the show whose influence appears in contemporary TV comedies almost every night of the week. In telling the tale, Armstrong, a former Entertainment Weekly reporter, offers a breezy tour of the way things used to be in television.”
— Portland Oregonian

"A perfect microhistory of television and feminism and writing and money and pressure and the joy of creativity and those capri pants she wore."
— The Hairpin

Jennifer Keishin Armstrong is the author of Sex and the City and Us, Seinfeldia, and Mary and Lou and Rhoda and Ted. She writes about pop culture for several publications, including The New York Times Book Review, Fast Company, Vulture, BBC Culture, Entertainment Weekly, and several others. She grew up in Homer Glen, Illinois, and now lives in New York City. Visit her online at JenniferKArmstrong.com.
Loading...
or support indie stores by buying on