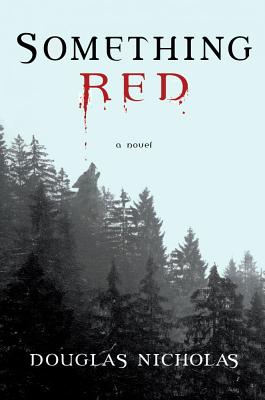 During the thirteenth century in northwest England, in one of the coldest winters in living memory, a formidable yet charming Irish healer, Molly, and the troupe she leads are driving their three wagons, hoping to cross the Pennine Mountains before the heavy snows set in. Molly, her lover Jack, granddaughter Nemain, and young apprentice Hob become aware that they are being stalked by something terrible. The refuge they seek in a monastery, then an inn, and finally a Norman castle proves to be an illusion. As danger continues to rise, it becomes clear that the creature must be faced and defeated—or else they will all surely die. It is then that Hob discovers how much more there is to his adopted family than he had realized.

An intoxicating blend of fantasy and mythology, Something Red presents an enchanting world full of mysterious and fascinating characters—shapeshifters, sorceresses, warrior monks, and knights—where no one is safe from the terrible being that lurks in the darkness. In this extraordinary, fantastical world, nothing is as it seems, and the journey for survival is as magical as it is perilous.

Praise For Something Red: A Novel…

“A hauntingly affecting historical novel with a touch of magic.”

“This darkly atmospheric debut novel is well worth its measured plot-building for its horrific, unexpected ending.”

“The most stunning debut novel I have ever read. The language is beautiful and descriptive; the novel is an incredible sensory experience for the reader.”


“The poetic nature of the language, the increasing of the novel’s atmospheric spook and the members of the traveling family made Something Red a winner.”

“Douglas Nicholas has written a gut-wrenching, harrowing novel in Something Red; however, he’s also written a touching, realistic story about what made a family, love, and life during a 13th century English winter . . . Nicholas’ storytelling painted this novel with historic realism that made it pop right off the page. . . If you like a non-stop thrilling roller coaster ride, hop on board with Something Red!”

“Nicholas handles characterization, setting and atmosphere deftly and expertly . . . Something Red is an excellent debut from a gifted author.”

“I was captivated by the writing and the story. The story includes so much of what one envisions what it must have been like to live at this time, castles,knights, monks, and pilgrims.”

“Nicholas utilizes an economy of description that pulls and teases the reader into the world, and allows the reader to dance along on the text. It is a delightful thing to find a tale that can create that surge of adrenaline, that thump of your pulse in your temples, and Nicholas delivers.”

“Stunning . . . Douglas Nicholas . . . is a writer of great promise. Not only can he spin a great yarn, but his prose is gorgeous.”

“With its smoky campfires, greased cart-axles and bees-waxed bowstrings,Something Red grounds us in the high middle ages so credibly that we are willing to believe in whatever monsters Douglas Nicholas asks us to.”
— Christopher Buehlman, author of Between Two Fires

“Kept me turning pages, racing towards the final confrontation.”

Douglas Nicholas is an award-winning poet, whose work has appeared in numerous poetry journals, and the author of four previous books, including Something Red and Iron Rose, a collection of poems inspired by New York City. He lives in New York’s Hudson Valley with his wife Theresa and Yorkshire terrier Tristan.
Loading...
or
Not Currently Available for Direct Purchase