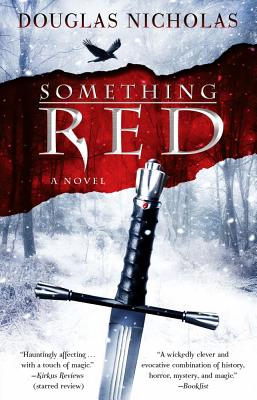 From debut novelist Douglas Nicholas comes a haunting fantasy of love, murder, and sorcery set in one of the coldest winters of thirteenth-century England.

In an intoxicating blend of fantasy and horror, acclaimed debut novel Something Red transports you to the harsh, unforgiving world of thirteenth-century England. An evil and age-old force stalks the countryside—who dares confront it?

Praise For Something Red: A Novel…


“The poetic nature of the language, the increasing of the novel’s atmospheric spook and the members of the traveling family made Something Red a winner.”
— MindingSpot

“Douglas Nicholas has written a gut-wrenching, harrowing novel in Something Red; however, he’s also written a touching, realistic story about what made a family, love, and life during a 13th century English winter . . . Nicholas’ storytelling painted this novel with historic realism that made it pop right off the page. . . If you like a non-stop thrilling roller coaster ride, hop on board with Something Red!”
— Popcorn Reads

“The most stunning debut novel I have ever read. The language is beautiful and descriptive; the novel is an incredible sensory experience for the reader.”
— Examiner.com

“Nicholas handles characterization, setting and atmosphere deftly and expertly . . . Something Red is an excellent debut from a gifted author.”
— Shelf Awareness

“This darkly atmospheric debut novel is well worth its measured plot-building for its horrific, unexpected ending.”
— Library Journal (starred review)

Douglas Nicholas is an award-winning poet, whose work has appeared in numerous poetry journals, and the author of four previous books, including Something Red and Iron Rose, a collection of poems inspired by New York City. He lives in New York’s Hudson Valley with his wife Theresa and Yorkshire terrier Tristan.
Loading...
or
Not Currently Available for Direct Purchase