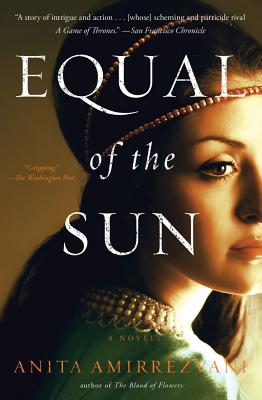 Equal of the Sun

Based loosely on the life of Princess Pari Khan Khanoom, Equal of the Sun is a riveting story of political intrigue and a moving portrait of the unlikely bond between a princess and a eunuch.

Iran in 1576 is a place of wealth and dazzling beauty. But when the Shah dies without having named an heir, the court is thrown into tumult. Princess Pari, the Shah’s daughter and protégée, knows more about the inner workings of the state than almost anyone, but her maneuvers to instill order after her father’s sudden death incite resentment and dissent. Pari and her closest adviser, Javaher, a eunuch able to navigate the harem as well as the world beyond the palace walls, possess an incredible tapestry of secrets that explode in a power struggle of epic proportions.

Legendary women—from Anne Boleyn to Queen Elizabeth I to Mary, Queen of Scots—changed the course of history in the royal courts of sixteenth-century England. They are celebrated in history books and novels, but few people know of the powerful women in the Muslim world, who formed alliances, served as key advisers to rulers, lobbied for power on behalf of their sons, and ruled in their own right. In Equal of the Sun, Anita Amirrezvani’s gorgeously crafted tale of power, loyalty, and love in the royal court of Iran, she brings one such woman to life, Princess Pari Khan Khanoom Safavi. Amirrezvani is a master storyteller, and in her lustrous prose this rich and labyrinthine world comes to vivid life with a stunning cast of characters, passionate and brave men and women who defy or embrace their destiny in a Machiavellian game played by those who lust for power and will do anything to attain it.

Praise For Equal of the Sun: A Novel…

“A page turner…. Here’s hoping Amirrezvani will write many more tales illuminating the incredible history of the Iranians.”
— The Washington Post

“A vibrant portrait of a country in the throes of change, with an extraordinary woman at its center.”
— San Jose Mercury News

Anita Amirrezvani is the author of the novel Equal of the Sun and The Blood of Flowers, which has been published in more than twenty-five languages and was longlisted for the Orange Prize for Fiction. She teaches at the California College of the Arts and Sonoma State University.
Loading...
or
Not Currently Available for Direct Purchase