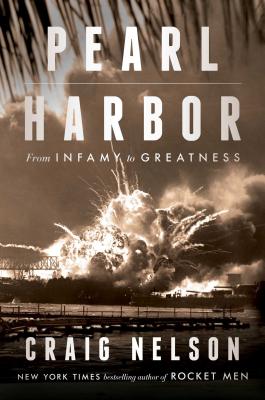 Published in time for the 75th anniversary, a gripping and definitive account of the event that changed twentieth-century America—Pearl Harbor—based on years of research and new information uncovered by a New York Times bestselling author.

The America we live in today was born, not on July 4, 1776, but on December 7, 1941, when an armada of 354 Japanese warplanes supported by aircraft carriers, destroyers, and midget submarines suddenly and savagely attacked the United States, killing 2,403 men—and forced America’s entry into World War II. Pearl Harbor: From Infamy to Greatness follows, moment by moment, the sailors, soldiers, pilots, diplomats, admirals, generals, emperor, and president as they engineer, fight, and react to this stunningly dramatic moment in world history.

Beginning in 1914, bestselling author Craig Nelson maps the road to war, beginning with Franklin D. Roosevelt, then the Assistant Secretary of the Navy (and not yet afflicted with polio), attending the laying of the keel of the USS Arizona at the Brooklyn Navy Yard. Writing with vivid intimacy, Nelson traces Japan’s leaders as they lurch into ultranationalist fascism, which culminates in their insanely daring yet militarily brilliant scheme to terrify America with one of the boldest attacks ever waged. Within seconds, the country would never be the same.

In addition to learning the little understood history of how and why Japan attacked Hawaii, we hear an abandoned record player endlessly repeating “Sunrise Serenade” as bombs shatter the decks of the California; we feel cold terror as lanky young American sailors must anxiously choose between staying aboard their sinking ships or diving overboard into harbor waters aflame with burning ship fuel; we watch as Navy wives tearfully hide with their children in caves from a rumored invasion, and we understand the frustration and triumph of a lone American teenager as he shoots down a Japanese bomber, even as the attack destroys hundreds of US airplanes and dozens of ships.

Backed by a research team’s five years of work, which produced nearly a million pages of documents, as well as Nelson’s thorough re-examination of the original evidence assembled by federal investigators, this page-turning and definitive work provides a thrilling blow-by-blow account from both the Japanese and American perspectives, and is historical drama on the grandest scale. Nelson delivers all the terror, chaos, violence, tragedy, and heroism of the attack in stunning detail, and offers surprising conclusions about the tragedy’s unforeseen and resonant consequences that linger even today.

“Gripping…Nelson infuses his account with the primary-source memories of the people involved, giving his book a tense, epic feel.”
—Christian Science Monitor

“A powerful, sweeping retelling of the Dec. 7, 1941, surprise Japanese bombing of U.S. military installations in Hawaii. The power derives from the author’s deliciously connecting political, economic and social dots going back to 1914 and giving the reader the soldiers’, the military’s and political leaders’ viewpoints, from both sides.”
—Albuquerque Journal

Craig Nelson is the author of Pearl Harbor: From Infamy to Greatness and the New York Times bestseller, Rocket Men: The Epic Story of the First Men on the Moon, as well as several previous books, including The Age of Radiance (a PEN Award Finalist chosen as one of the year’s best books by NBC News, the American Institute of Physics, Kirkus Reviews, and FlavorWire), The First Heroes, Thomas Paine (winner of the Henry Adams Prize), and Let’s Get Lost (shortlisted for W.H. Smith’s Book of the Year). His writing has appeared in Vanity Fair, The Wall Street Journal, Salon, National Geographic, The New England Review, Popular Science, Reader’s Digest, and a host of other publications.
Loading...
or
Not Currently Available for Direct Purchase