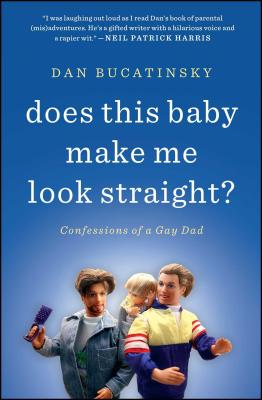 Does This Baby Make Me Look Straight? (Paperback)

Confessions of a Gay Dad

From actor/writer/producer Dan Bucatinsky, executive producer of NBC’s Who Do You Think You Are?, a collection of snort-milk-through-your-nose funny stories of parenthood that will obliterate the boundaries of gender and sexual orientation, and sweep readers up on a journey into fatherhood—warts and all.

In 2005, Dan Bucatinsky and his partner, Don Roos, found themselves in an LA delivery room, decked out in disposable scrubs from shower cap to booties, to welcome their adopted baby girl—launching their frantic yet memorable adventures into fatherhood. Two and a half years later, the same birth mother—a heroically generous, pack-a-day teen with a passion for Bridezilla marathons and Mountain Dew—delivered a son into the couple’s arms. In Does This Baby Make Me Look Straight? Bucatinsky moves deftly from sidesplitting stories about where kids put their fingers to the realization that his athletic son might just grow up to be straight and finally to a reflection on losing his own father just as he’s becoming one. Bucatinsky’s soul-baring and honest stories tap into that all-encompassing, and very human, hunger to be a parent—and the life-changing and often ridiculous road to getting there.

Dan Bucatinsky wrote, produced, and starred in the indie romantic comedy All Over the Guy and is currently a cocreator and costar of the acclaimed web-to-television Showtime series Web Therapy. He continues to act, write, and produce for film and television. He lives in California.

Praise For Does This Baby Make Me Look Straight?: Confessions of a Gay Dad…

“I was laughing out loud as I read Dan's book of parental (mis)adventures. He's a gifted writer with a hilarious voice and rapier wit. " —Neil Patrick Harris

"Oh my GOD, I LOVE this book. It’s a hilarious account of Dan’s journey through life, love, Hollywood, and fatherhood. It’s brilliant and SO funny.” –Gwyneth Paltrow, Oscar-winning actress and author of My Father's Daughter

"I read Dan's compelling and 'modern' book in almost one sitting and when my face wasn't in my hands laughing myself silly, I was touched and moved by Dan's ability to stay in his heart." —Jane Lynch

"Okay. I know Dan. We’ve worked together for almost ten years. I’ve never seen him naked. But after reading his book, I feel like I’ve seen him without a stitch, no cover, completely bare. I also saw myself in this as a parent and thought “Oh, I’m not alone with my thoughts.” It’s good not to be all alone with these feelings and as is usual for me, Dan is the perfect company to keep."—Lisa Kudrow

“This book will make you laugh, cry, cringe in sympathy, and delight along with Dan, his husband, and his two adorable kids.” –Ayelet Waldman, author of Bad Mother

"This book is unbelievably heartwarming and hysterically funny. Dan Bucatinsky's stories are beautiful, capturing the ways children challenge and teach their parents about living." --Rosie O'Donnell

“In Does This Baby Make Me Look Straight? Dan Bucatinsky captures the joys, terrors, and absurdities of being a gay parent. But this funny, touching book is for all parents—gay or straight” —Dan Savage, author of The Kid

“Few people make me laugh as much as Dan Bucatinsky, but I was not prepared this time to be crying between the guffaws. This is a book I will return to again and again for its humor, that's a no-brainer, but for its sly wisdom as well.” —Terrence McNally, Tony award-winning playwright.

“Loved how Dan bounced from crazy silly to gut wrenching and heartwarming. His humor was the sugar that made the crystal meth of his life go down. I will be a better parent because he went places and made some mistakes so I don't have to. Adoption is so difficult and just being in a relationship is hard enough, but as he made clear in the book, so frickin’ worth it.” —Tom Arnold

"Once I put my kid to bed, this book made me laugh out loud late into the night. The perils of parenting as told by Dan are hilarious and heartbreaking and utterly recognizable to anyone who has a child. Brilliant." –Shonda Rhimes, creator of Grey’s Anatomy

"I devoured this book. I love Dan's story, his kids and his writing." –Jennifer Garner

"This is a smart, funny, relatable and altogether human book. How are families made? With love, and courage, and laughter, and grace––all abundantly present in this terrific story. I wish Dan Bucatinsky lived next door to me so we could kvell and kvetch together about our beautiful kids and the complexities of modern parenthood." —Dani Shapiro, author of the bestselling memoir Slow Motion

"This book is hilarious, honest, heartfelt. Any parent--any person--gay or straight, will be able to relate to Dan Bucatinsky's captivating story. He's not just a great comedy writer, he's a great writer. With his own unique voice, he shines a light on the joys and challenges of family life. I'd put it in a time capsule... people in the future can read it and know what it was to be alive at the dawn of the 21st Century." —Bill Wrubel, Executive Producer, Modern Family

"If Erma Bombeck and Oscar Wilde wrote a book together, the result would be 'Does This Baby Make Me Look Straight.' Lucky for Dan Bucatinsky, they're both dead." --Josh Kilmer-Purcell, author of I’m Not Myself These Days