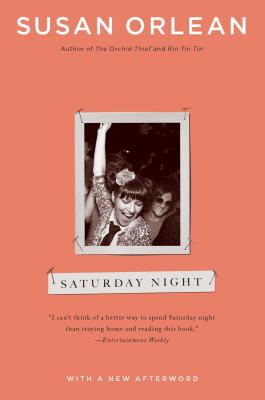 From Susan Orlean, the bestselling author of The Orchid Thief and Rin Tin Tin, comes a new edition of her first book, a quirky classic of narrative journalism that offers an irresistible portrait of how Saturday night in America is lived—with a new Afterword by the author.

Twenty years ago, before she wrote The Orchid Thief or was hailed as “a national treasure” by The Washington Post, Susan Orlean was a journalist with a question: What makes Saturday night so special? To answer it, she embarked on a remarkable journey across the country and spent the evening with all sorts of people in all sorts of places—hipsters in Los Angeles, car cruisers in small-town Indiana, coeds in Boston, the homeless in New York, a lounge band in Portland, quinceañera revelers in Phoenix, and more—to chronicle the one night of the week when we do the things we want to do rather than the things we need to do. The result is an irresistible portrait of how Saturday night in America is lived that remains.

“I can’t think of a better way to spend Saturday night than staying home and reading this book.” —Entertainment Weekly

“Orlean’s high spirits and intelligence give her book the feeling of a good Saturday-night conversation. Her chapters are like beginnings of suspenseful novels.” —USA Today

“An unusual and entertaining cultural profile . . . with the drollness of her prose, the sharpness of her ear and eye, and her breadth of curiosity . . . Enlightening.” —Christopher Lehmann-Haupt, The New York Times

“Delightful . . . Entertaining and interesting . . . A pleasant reminder of how we are at once united by certain of our national customs yet divided by the individual or tribal ways in which we celebrate them.” —Jonathan Yardley, The Washington Post

“Orlean, a quirky curator of modern cultural behavior . . . has documented those few hours so near and dear to every working-weeker. . . . A slide show shot in vivid Americana.” —Matthew Gilbert, The Boston Globe

“Amusing and informative . . . Orlean has a nearly unerring ear and eye for the pithy and the illuminating.” —David Finkle, Chicago Tribune

Susan Orlean has been a staff writer at The New Yorker since 1992. She is the New York Times bestselling author of seven books, including The Library Book, Rin Tin Tin, Saturday Night, and The Orchid Thief, which was made into the Academy Award–winning film Adaptation. She lives with her family and her animals in Los Angeles and may be reached at SusanOrlean.com and on Twitter @SusanOrlean.
Loading...
or support indie stores by buying on