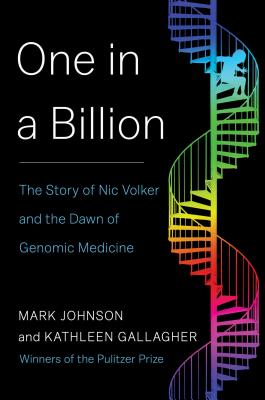 One in a Billion (Hardcover)

The Story of Nic Volker and the Dawn of Genomic Medicine

The breathtaking story of a young boy with a never-before-seen disease, and the doctors who take a bold step into the future of medicine to save him—based on the authors’ Pulitzer Prize–winning reporting.

In this landmark medical narrative, in the tradition of The Immortal Life of Henrietta Lacks and The Spirit Catches You and You Fall Down, Pulitzer Prize–winning journalists Mark Johnson and Kathleen Gallagher chronicle the story of Nic Volker, the Wisconsin boy at the center of a daring breakthrough in medicine—a complete gene sequencing to discover the cure for an otherwise undiagnosable illness. At just two years old, Nic experienced a searing pain that signaled the awakening of a new and deadly disease, one that would hurl Nic and his family up against the limits of modern medicine.

For years, through false starts and failed cures, Nic holds on to life, buoyed up by his mother’s fierce drive to get him the care he needs. But when even the world’s experts are stumped by Nic’s illness, his doctors come up with a radical, long-shot plan: a step into the unknown.

The next major scientific frontier, following the completion of the Human Genome Project, was to figure out how to use our new knowledge to save lives—to bring genomic or personalized medicine into reality. It’s a quest that is undertaken by researchers around the world. But it is only when geneticist Howard Jacob hears about young Nic that the finish line finally comes into sight: It’s no longer a race to make history. It’s a race to save this boy’s life.

One in a Billion is an unforgettable tale of the lives that converged to launch a medical revolution. As pioneering geneticist Mary-Claire King pronounced upon learning Nic’s story: “It was as if one had heard about Case Zero of AIDS and the cure, all at once.”

Mark Johnson is a health and science reporter at the Milwaukee Journal Sentinel, where he has worked since 2000. He was a member of the Journal Sentinel team that won the Pulitzer Prize for explanatory reporting on the Nic Volker story in 2011. He is also a three-time finalist for the Pulitzer Prize and has won numerous other awards for his reporting. He lives with his wife and son in Fox Point, WI.

Kathleen Gallagher is a business reporter at the Milwaukee Jour­nal Sentinel, where she has worked since 1993. She was a member of the Journal Sentinel team that won the Pulitzer Prize for explanatory reporting on the Nic Volker story in 2011. She was also part of a team that won the 2006 Inland Press Association award for explanatory report­ing. She lives with her husband and two children in Wauwatosa, WI.

Praise For One in a Billion: The Story of Nic Volker and the Dawn of Genomic Medicine…

“A riveting scientific detective story, enriched by thorough research and the kind of intimate access to key players that good journalists develop during years of dogged beat reporting. … The book’s greatest strength is its portrayal of the boldness of the team’s decision to sequence and analyze Nic’s genes, a foray into uncharted medical and ethical territory.”
—The Washington Post

“This is a must-read for anyone who has a heart and dreams of a healthy future.”
—Green Bay Press-Gazette

"A compelling story of a modern medical miracle — the first instance of personalized medicine."
—Milwaukee Journal-Sentinel

“A fast-paced narrative that interweaves science, ethics and insight into the behemothic bureaucracy of hospital care. … The authors do the seemingly impossible … This is a book that explains the past, present and future of medical care, and it gives hope that this new science might provide more definitive diagnoses and new treatments.”
—The Florida Times-Union

“Compelling … Every human in this story, reported over years by Pulitzer Prize-winning journalists Mark Johnson and Kathleen Gallagher, is a protagonist. … Johnson and Gallagher cut through the jargon and simplify the science. They thankfully make this a human story with gripping and sometimes blemished characters who all want the same thing: to save a child's life.”
—Tampa Bay Times

“A chronicle of an amazing medical odyssey, and these authors are uniquely qualified to tell it. … An unforgettable tale … which will appeal not only to those with an interest in science and medicine, but also those who cherish accounts of the less tangible essence of human nature—as in the metaphorical heart and soul.”
—Providence Journal

“One in a Billion is as rare and compelling as its title suggests. Pulitzer Prize winners Mark Johnson and Kathleen Gallagher have written a stirring narrative that powerfully illuminates a promising new medical world.”
—David Maraniss, author of Once in a Great City: A Detroit Story

"A dramatic chronicle of how a team of doctors and scientists collaborated to save the life of a young boy suffering from a rare genetic disease and, in the process, played an important part in launching personalized medicine. ... The exciting tale of a major medical milestone."
—Kirkus Reviews

“Engrossing … This is a moving, skillfully written book that's well positioned to introduce a broad audience to the profound clinical relevance of whole-genome and exome sequencing.”
—Publishers Weekly

“The story of Nic Volker’s extraordinary diagnostic odyssey represents perhaps the single most exciting example of the vast potential of personalized genomic medicine. Mark Johnson & Kathleen Gallagher have followed every twist and turn in Nic’s genomic journey. One in a Billion reveals the fearlessness of the Wisconsin scientists who poured over Nic’s DNA seeking answers and the unwavering resolve of Nic and his family. Above all, Johnson & Gallagher show how one brave boy’s example offers a prescription for a revolution in healthcare.”
—Kevin Davies, author of The $1,000 Genome and Cracking the Genome

“Key events can trigger a tsunami of interest in new technologies. The first Apple II in 1977 introduced us to the personal computer, the first web browser in 1993 introduced us to the Internet—and now we have the cure for little Nic Volker. Mark Johnson and Kathleen Gallagher do a heroic job of sweeping away the common misperception that useful human genetics lie only in the far off future. Well, the future is now! The tale of charming Nic will move you and perhaps make you a passionate advocate for this new technology.”
—George Church, co-author of Regenesis and Professor of Genetics, Harvard University

“The story of the first human being whose life was saved by genome sequencing is riveting, a veritable tour de force by Johnson and Gallagher. But the narrative goes well beyond this one remarkable boy—this is medicine’s future.”
—Eric Topol, author of The Patient Will See You Now and Professor of Genomics, The Scripps Research Institute
or
Not Currently Available for Direct Purchase
Copyright © 2020 American Booksellers Association