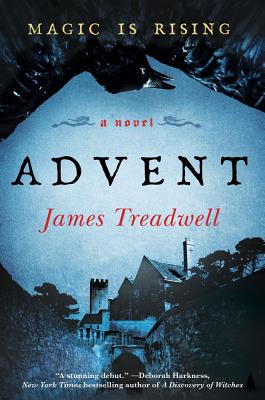 A drowning, a magician’s curse, and a centuries-old secret.

1537. A man hurries through city streets in a gathering snowstorm, clutching a box in one hand. He is Johann Faust, the greatest magician of his age. The box he carries contains a mirror safeguarding a portion of his soul and a small ring containing all the magic in the world. Together, they comprise something unimaginably dangerous.

London, the present day. Fifteen-year-old Gavin Stokes is boarding a train to the countryside to live with his aunt. His school and his parents can’t cope with him and the things he sees, things they tell him don’t really exist. At Pendurra, Gavin finds people who are like him, who see things too. They all make the same strange claim: magic exists, it’s leaking back into our world, and it’s bringing something terrible with it.

First in an astonishingly imaginative fantasy trilogy, Advent describes how magic was lost to humanity, and how a fifteen-year-old boy discovers that its return is his inheritance. It begins in a world recognizably our own, and ends an extraordinarily long way from where it started—somewhere much bigger, stranger, and richer.