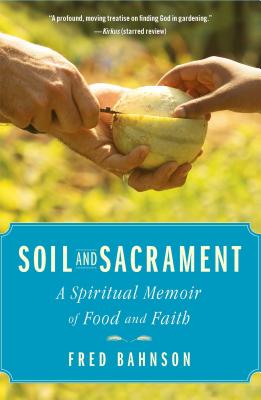 A Spiritual Memoir of Food and Faith

Part spiritual quest, part agricultural travelogue, this moving and profound exploration of the joy and solace found in returning to the garden is inspiring and beautiful.

A POWERFUL, PERSONAL STORY OF HOW GROWING AND SHARING FOOD PULLS US CLOSER TO GOD

Like many seekers of the authentic life, Fred Bahnson sought answers to big questions like What does it mean to follow God? and How should I live my life? But after divinity school at Duke, Bahnson began to find answers not in a pulpit, but at the handle of a plow. After his agrarian conversion, Bahnson started a faith-based community garden in rural North Carolina to help its members grow real food and to feed his own spiritual hunger.

Soil and Sacrament tells the story of how Bahnson and people of faith all over America are re-rooting themselves in the land, reconnecting with their food and each other, and praying with their very lives the prayer of the early Christian monks: “We beg you, make us truly alive.” Through his journeys to four different faith communities—Catholic, Protestant, Pentecostal, and Jewish—Bahnson explores the con­nections between spiritual nourishment and the way we feed our bodies with the sensitivity, personal knowledge, and insight shared by Wendell Berry and Bill McKibben.

Soil and Sacrament is a book about communion in its deepest sense—an inspiring and joyful meditation on what grows above the earth, beneath it, and inside each one of us.

Praise For Soil and Sacrament: A Spiritual Memoir of Food and Faith…

“Fred Bahnson had me at the hairy vetch and crimson clover. He bumped me off the couch and into the garden even before I could finish the book. I’m all for seekers who sit around asking, ‘What does it mean to be fully alive?’ But it’s even better when they stop asking and start doing. Faith, it turns out, is not unlike a hand-cranked spreader. Works on all kinds of soil. Plants where you put it. Amen.”
— Rhoda Janzen

“This book is profoundly, beautifully down to earth, which is almost certainly where we all need to spend more time on a planet in crisis.”
— Bill McKibben

“Fred Bahnson believes that faith is expressed in the work of our hands as well as our minds and hearts, and that in community we can meet the needs of a hungry world. After reading his beautifully written book, I believe these things, too, and see new ways to put my beliefs into action. Soil and Sacrament is about new life—for ourselves, our descendants, and the earth on which we all depend. Read it, let it move you, and shelve it next to Wendell Berry, Annie Dillard, and Kathleen Norris.”
— Parker J. Palmer

“Soil and Sacrament is a journey of return toward the founding Christian fact: spiritual life is not divorced from natural life, it is natural life bowing to an extra-natural, life-giving, never-ending miracle.”
— David James Duncan

“This is a very moving as well as a wonderfully intelligent meditation on what is involved in care for our earth. Fred Bahnson succeeds in showing how our practices of cultivating the environment and producing our food can become an integral part of a ‘gospel for all creation.’ In a culture obsessed with both growth and control, his spiritual insight is a gentle but clear challenge.”
— Rowan Williams, former Archbishop of Canterbury

“This is a spiritual memoir with real dirt under its fingernails, as deep and gritty and rich as well-tended soil—or Holy Scripture. Fred Bahnson's vision matters, and the work he writes so beautifully and unsentimentally about has the power to change communities. An important and moving book.”
— Sara Miles

Fred Bahnson is a writer, permaculture gardener, and the cofounder and former director of Anathoth Community Garden. The coauthor of Making Peace With the Land, his essays have appeared in Oxford American, Image, The Sun, Christian Science Monitor, and Best American Spiritual Writing 2007. He is the recipient of a Kellogg Food & Community fellowship and a North Carolina Artist fellowship in Creative Nonfiction. He lives with his wife and three sons in western North Carolina and is the director of the Food, Faith, and Religious Leadership Initiative at Wake Forest University School of Divinity.
Loading...
or
Not Currently Available for Direct Purchase