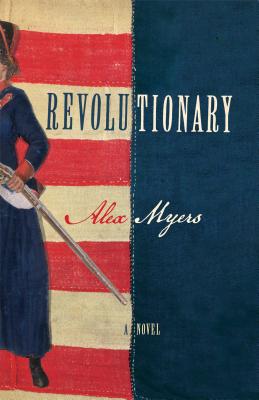 A fascinating retelling of the story of America’s first female soldier, Deborah Sampson Gannett, who ran away from home in 1782, successfully disguised herself as a man, and fought valiantly in the Revolutionary War.

“A novel of the American Revolution by a writer who is himself a true American revolutionary.” —Mark Edmundson, author of Why Teach?

In 1782, during the final clashes of the Revolutionary War, one of our young nation’s most valiant and beloved soldiers was, secretly, a woman.

When Deborah Samson disguised herself as a man and joined the Continental Army, she wasn’t just fighting for America’s independence—she was fighting for her own. Revolutionary, Alex Myers’s richly imagined and meticulously researched debut novel, brings the true story of Deborah’s struggle against a rigid colonial society back to life—and with it the courage, hope, fear, and heartbreak that shaped her journey through a country’s violent birth.

After years as an indentured servant in a sleepy Massachusetts town, chafing under the oppressive norms of colonial America, Deborah can’t contain her discontent any longer. When a sudden crisis forces her hand, she decides to finally make her escape. Embracing the peril and promise of the unknown, she cuts her hair, binds her chest, and, stealing clothes from a neighbor, rechristens herself Robert Shurtliff. It’s a desperate, dangerous, and complicated deception, and becomes only more so when, as Robert, she enlists in the Continental Army.

What follows is an inspiring, one-of-a-kind journey through an America torn apart by war: brutal winters and lethal battlefields, the trauma of combat and the cruelty of betrayal, the joy of true love and the tragedy of heartbreak. In his brilliant Revolutionary, Myers, who himself is a descendant of the historical Deborah, takes full advantage of this real-life heroine’s unique voice to celebrate the struggles for freedom, large and small, like never before.

This is a bona fide and unforgettable Revolutionary War novel. … [An] approachable, imaginative novel, a tale of muskets and masquerade, of marches and mutiny, that is also as an evocative portrayal of life in the Continental Army.… Remarkable.

A vividly detailed fictionalization of the true story of Massachusetts-born Deborah Sampson... Revolutionary succeeds on a number of levels, as a great historical-military adventure story, as an exploration of gender identity, and as a page-turning description of [a] fascinating life.

"[An] evocative debut novel... Revolutionary, of course, is a work of fiction, not history, and Myers' great accomplishment is creating a moving version of Sampson's inner life."

"[Revolutionary] is an exciting account of a young woman who experiences the sudden freedom that comes with shedding the constrictions of societal gender norms at a time when such a thing was unheard of."

Myers’ excellent research and skilled writing combine to create an absorbing story with an interesting protagonist and topics worth contemplating. A fine debut.

[Myers] writes well about identify and gender…[A] new take on historical accounts of transgender people; Myers explores not just how Deborah manages to pass as a man but her reasons for doing so.

“I raced through this vividly imagined tale, unable to put it down. It is a remarkable story of a quest for independence so unusual and startling that it is remarkable to know that it was based on the author's ancestor, a young indentured woman who discovered the freedom and ultimately the cost of becoming a man. Set during the Revolutionary War, it is teeming with insight, as astonishing as it is readable, a story that reveals the limitations women faced and the courage it took to defy them.”
— Robin Oliviera, author of My Name Is Mary Sutter

"Alex Myers' novel is terrific. The book is a page turner; it has characters you care about; and it is imaginative in the best sense of the word. Myers' recreation of Deborah Sampson at war is vivid and full of suspense ... I look forward to its success."
— Alfred F. Young

"Alex Myers' debut novel, Revolutionary, is more than an accounting of Deborah Sampson's amazing Revolutionary war feat of enlisting and serving a three-year tour in the army disguised as a man; it is an exploration of the irony of such circumstances. In following her true nature--who she is at heart--Deborah creates for herself a duplicitous life fraught with personal risk. This beautifully written account is a reminder that gender identity and the struggle for equal rights has always been with us. Perhaps now, in our time, we can set aside our biases and not simply ask how Deborah Sampson did what she did, but understand why."
— Heather Sharfeddin

"A novel of the American Revolution by a writer who is himself a true American revolutionary."
— Mark Edmundson

"Alex Myers’ debut novel is a marvel. Revolutionary explores the life of Deborah Samson who, passing as a man, fought in the Revolutionary War. In this exquisitely rendered fictional account, Myers paints a portrait of a complex woman whose tribulations and triumphs echo in our own time. This is a book about what it means to be a hero, a woman, and a person who refuses to accept the limiting roles society imposes. It also, deftly and with grace, explores the intricate and shifting boundaries of passion and love."
— Connie May Fowler

Alex Myers is a writer, teacher, speaker, and activist. Since high school, Alex has campaigned for transgender rights. As a female-to-male transgender person, Alex began his transition at Phillips Exeter Academy and was the first transgender student in that academy’s history. Alex was also the first openly transgender student at Harvard and worked to change the university’s nondiscrimination clause to include gender identity. For the past decade, he has taught English at private high schools and currently lives in Washington, DC, with his wife and two cats.
Loading...
or
Not Currently Available for Direct Purchase