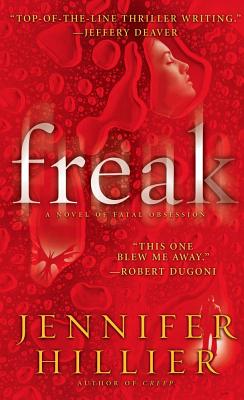 This sequel to Jennifer Hillier’s debut Creep is “taut and fraught with surprise twists… addictive” (Kirkus Reviews) and features an obsessed fan of accused murderer Abby Maddox, a fan who is willing to keep killing young women until Abby is released from prison.

Jennifer Hillier amps up the terror of her “truly frightening” (Suspense Magazine) debut thriller, Creep, returning to the Pacific Northwest college town where one killer’s stranglehold has ebbed . . . but another sick mind emerges from the shadows.

Inside a maximum-security prison cell, Abby Maddox is serving twenty years for slashing Seattle PD officer Jerry Isaac’s throat during the harrowing capture of her former lover, serial killer Ethan Wolfe. To the demented fans, lunatics, and creeps on the outside, she is a celebrity. But to Jerry, now a private investigator whose scarred neck and tortured speech are daily reminders of Abby’s vicious attack, she alone may be the key to solving a new wave of murders. Because this killer has been sending her love letters, and carving a message on the victims’ bodies: Free Abby Maddox.

With the help of intuitive criminology student Danny Mercy, Puget Sound State professor Sheila Tao, and seasoned detective Mike Torrance, Jerry must coax the shattering truth from isolated, dangerous Abby—before her number-one fan takes another life in the name of a killer’s perverted idea of justice.

“The second book in this series leaves readers hungry for the next. Taut and fraught with surprise twists, Hillier’s thriller is addictive.”--Kirkus

" This book freaked me out – in a good way. In a word, “frightening.” Jennifer Hillier creates a truly scary killer in Abby Maddox, the female version of Hannibal Lecter – smart, cunning and wickedly evil. I was engrossed on page one, couldn’t put the book down and breathless at the ending.  Be prepared for a late night's reading. Then sleep with the lights on – if you can. This one blew me away."
--Robert Dugoni, New York Times bestselling author of Murder One

Jennifer Hillier is the author of Wonderland, Creep, Freak, and The Butcher. Born and raised in Toronto, Canada, she lives in the Seattle area with her husband and son. Visit her on the web at JenniferHillier.ca.
Loading...
or
Not Currently Available for Direct Purchase