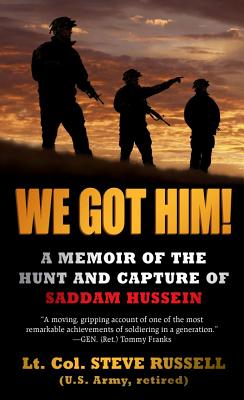 From retired U.S. Army Lt. Col. Steve Russell comes a compelling firsthand account of the blow-by-blow plays of the actual raids that led to the capture of Saddam Hussein in 2003.

When U.S. forces exterminated Osama bin Laden in Pakistan on May 1, 2011, the world witnessed a brilliantly fruitful example of history repeating itself; less than a decade earlier, the capture of Saddam Hussein, a triumph of military strategy in and of itself, opened the door for the more recent and essential victory in the War on Terror.

At the center of the six-month manhunt were Lt. Col. Steve Russell and his men of the 1st Battalion, 22nd Infantry Regiment, 4th Infantry Division. With his extensive journal notes, combat reports, and painstaking research, Russell has preserved the story as only someone who lived the experience can do. His narrative chronicles the daily successes and dead ends, and describes, blow-by-blow, the actual raids that netted Saddam, culminating in the electrifying quote heard around the globe, “We Got Him!”

Steve Russell served twenty-one years in the United States Army as an infantry officer, deploying operationally to Kosovo, Kuwait, Afghanistan, and Iraq. He was widely covered during the first year of the Iraq War by Time, CNN, Fox News, ABC, CBS, NBC, AP, and Reuters. He and his unit were featured in BBC Panorama’s Saddam on the Run documentary as well as Discovery’s Ace in the Hole. He has also been the subject of numerous books and publications. Russell retired from the Army in 2006 and now serves in the Oklahoma State Senate. He lives in Oklahoma with his wife and five children.
Loading...
or
Not Currently Available for Direct Purchase