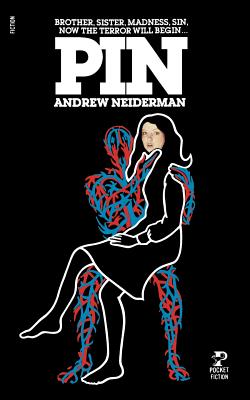 Young Leon and Ursula had little except each other. Mother was driven by a psychotic need to clean—constantly—everything in sight. Father was consumed by his medical practice and an analytical approach to life. But he understood the sensual hunger growing inside his children’s young bodies. He knew they could help each other answer, “The Need.” Father had Science. Father had Reason. And he had Pin.
Pin who answered all the children’s questions in a voice not unlike the doctor’s. Father’s clever trick. Father’s brilliant illusion. But then there was the accident and Mother and the doctor were dead. Still there was Pin—who had so much to tell then even yet…whose enigmatic stare held such wisdom. There would just be the three of them now. Quiet Leon, beautiful and frightened Ursula, and wise, implacable Pin. They were all each of them would need. Ever.

Andrew Neiderman is the author of numerous novels of suspense and terror, including Deficiency, The Baby Squad, Under Abduction, Dead Time, Curse, In Double Jeopardy, The Dark, Surrogate Child, and The Devil’s Advocate—which was made into a major motion picture starring Al Pacino, Keanu Reeves, and Charlize Theron. He lives in Palm Springs, California, with his wife, Diane. Visit his website at Neiderman.com.
Loading...
or support indie stores by buying on