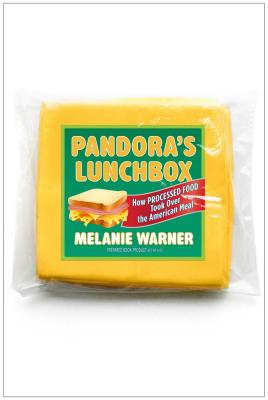 In the tradition of Fast Food Nation and The Omnivore’s Dilemma a fascinating and cutting-edge look at the scary truth about what really goes into our food.

In the tradition of Fast Food Nation and The Omnivore’s Dilemma comes a fascinating and cutting-edge look at the scary truth about what really goes into our food.

If a piece of individually wrapped cheese can retain its shape, color, and texture for years, what does it say about the food we eat and feed to our children?

Former New York Times business reporter and mother Melanie Warner decided to explore that question when she observed the phenomenon of the indestructible cheese. She began an investigative journey that took her to research labs, university food science departments, and factories around the country. What she discovered provides a rare, eye-opening—and sometimes disturbing—account of what we’re really eating. Warner looks at how decades of food science have resulted in the cheapest, most abundant, most addictive, and most nutritionally inferior food in the world, and she uncovers startling evidence about the profound health implications of the packaged and fast foods that we eat on a daily basis.

From breakfast cereal to chicken subs to nutrition bars, processed foods account for roughly 70 percent of our nation’s calories. Despite the growing presence of farmers’ markets and organic produce, strange food additives are nearly impossible to avoid. Warner digs deep into the ingredient lists of purportedly healthy foods, and what she finds will change the way readers eat—and how they feed their children.

Combining meticulous research, vivid writing, and cultural analysis, Warner blows the lid off the largely undocumented—and lightly regulated—world of chemically treated and processed foods and lays bare the potential price we may pay for consuming even so-called healthy foods.

Melanie Warner is a freelance writer for various publications, including The New York Times and Fast Company. She has spent the past fifteen years writing about business, first as a writer at Fortune magazine, where among other things, she wrote about the dotcom boom in Silicon Valley. She was also a staff reporter for The New York Times, covering the food industry. The author of The Magic Feather Effect and Pandora’s Lunchbox, she lives in Honolulu.

Praise For Pandora's Lunchbox: How Processed Food Took Over the American Meal…

“In Pandora’s Lunchbox, Melanie Warner has produced an engaging account of how today’s ‘food processing industrial complex’ replaced real foods with the inventions of food science. Her history of how this happened and who benefits from these inventions should be enough to inspire everyone to get back into the kitchen and start cooking.”
— Marion Nestle, Professor of Nutrition, Food Studies, and Public Health at New York University and coauthor of Why Calories Count: From Science to Politics

"Pandora's Lunchbox is a brilliant and fascinating exploration of how our food gets processed, its powerful effects on our health, and what we can do about it. Highly recommended!"
— Dean Ornish M.D., author of Eat More, Weigh Less, and The Spectrum: A Scientifically Proven Program to Feel Better, Live Longer, Lose Weight, and Gain Health

"Melanie Warner is a journalist of keen skill, and in Pandora's Lunchbox she pries the lid off well-packaged secrets about how our so-called food is made. The resulting bounty of insights and revelations is almost overwhelming. This is a book of stunning, at times shocking truths, told in a crisp, compelling narrative. Of profound importance for everyone who eats."
— David L. Katz, MD, MPH, FACPM, FACP, Director of Yale University Prevention Research Center and Director of Integrative Medicine Center at Griffin Hospital

“Warner pulls back the curtain to reveal the industry secrets of how our most basic staples are being transformed into processed foodstuffs to boost profits. We get an (un)healthy dose of hexane-extraction, gun puffing and roast chicken type flavor, but like the best investigative journalists, she uses the personal stories of food scientists, innovators, and crusaders not to mention her own home experiments, to show why you’ll want to think twice before hitting the drive-thru or reaching for that ‘health bar.’”
— Robert Kenner, director of Food, Inc.