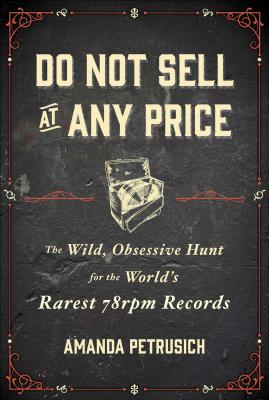 Do Not Sell At Any Price (Hardcover)

The Wild, Obsessive Hunt for the World's Rarest 78rpm Records

The untold story of a quirky and important subculture: The world of 78rpm records and the insular community that celebrates them—by acclaimed music critic and author Amanda Petrusich, who contributes regularly to Pitchfork, The Oxford American, and The New York Times.

Before MP3s, CDs, and cassette tapes, even before LPs or 45s, the world listened to music on 78rpm records—those fragile, 10-inch shellac discs. While vinyl records have enjoyed a renaissance in recent years, good 78s are exponentially harder to come by and play. A recent eBay auction for the only known copy of a particular record topped out at $37,100. Do Not Sell at Any Price explores the rarified world of the 78rpm record—from the format’s heyday to its near extinction—and how collectors and archivists are working frantically to preserve the music before it’s lost forever.

Through fascinating historical research and beguiling visits with the most prominent 78 preservers, Amanda Petrusich offers both a singular glimpse of the world of 78 collecting and the lost backwoods blues artists whose 78s from the 1920s and 1930s have yet to be found or heard by modern ears. We follow the author’s descent into the oddball fraternity of collectors—including adventures with Joe Bussard, Chris King, John Tefteller, Pete Whelan, and more—who create and follow their own rules, vocabulary, and economics and explore the elemental genres of blues, folk, jazz, and gospel that gave seed to the rock, pop, country, and hip-hop we hear today. From Thomas Edison to Jack White, Do Not Sell at Any Price is an untold, intriguing story of preservation, loss, obsession, art, and the evolution of the recording formats that have changed the ways we listen to (and create) music.

Amanda Petrusich is the author of It Still Moves: Lost Songs, Lost Highways, and the Search for the Next American Music and Pink Moon, an installment in Continuum/Bloomsbury’s acclaimed 33 1/3 series. Her writing has appeared in The New Yorker, The New York Times, The New York Times Magazine, The Atlantic, Pitchfork, Spin, and The Oxford American, where she is a contributing editor. In 2016, she was named one of the 100 most influential people in Brooklyn culture by Brooklyn Magazine. She holds an M.F.A. from Columbia University, and has received fellowships from the Guggenheim Foundation, the New York Foundation for the Humanities and the MacDowell Colony. An assistant professor in the writing program at NYU’s Gallatin School of Individualized Study, she teaches advanced courses on criticism and musical subcultures. She lives in Brooklyn.

Praise For Do Not Sell At Any Price: The Wild, Obsessive Hunt for the World's Rarest 78rpm Records…

“One of the best things I've read about that inexplicably, but endlessly, fascinating group of people, the so-called Serious Collectors of 78s. Petrusich burrows into not just their personalities but the hunger that unites and drives their obsessions. She writes elegantly, and makes you think, and most important,manages to hang onto her skepticism in the midst of her own collecting quest.”
— John Jeremiah Sullivan, author of "Pulphead"

“This is an adventure story: Amanda in the Land of MagicalShellac. Petrusich, a warm and witty writer and longtime music journalist,encounters the eccentric, soulful characters who've devoted their lives thearcane practice of hunting old records, shares stories of great lost musicians,and ponders the philosophical issues that make collecting more than just afancy version of hoarding. Readers will be delighted to become her confidanteson this life-changing journey.”
— Ann Powers, author of "Weird Like Us: My Bohemian America"

"I don't know hillbilly from Blind Willie, but I loved Amanda Petrusich's archaeology of an almost-lost world of American music. Do Not Sell at Any Price is like a well-loved 78: it pops, it crackles, it seduces utterly."
— Ken Jennings, author of "Maphead"

“This is American history as the tale of an American obsession—the record collectors, be they scholars, scroungers, hoarders, or heroes. In this brilliant book, Petrusich hits the road with these junk-shop blues Ahabs around the country—she makes you feel the frenzy of the chase, on a crazed, loving quest to rescue lost music from oblivion.”
— Rob Sheffield, author of "Love Is a Mix Tape" and "Turn Around Bright Eyes"

"Amanda Petrusich’s fascinating and insightful journey into the arcane netherworld of 78 records and its bring-‘em-back-alive collectors brims with the joy and passion of discovery, along with a heartfelt affection for those who keep alight the flame of our musical heritage."
— Lenny Kaye, guitarist, "Nuggets" anthologist, author "You Call It Madness"

“Petrusich enters the dusty realms of 78 rpm record junkies, and like Rolling Stones chronicler Stanley Booth, catches her subjects' disease. But she's mostly interested in the emotional heart of things, and the old music's strange power. An entertaining road tale and moving self-interrogation that dives deep for answers, sometimes literally.”
— Will Hermes, author of "Love Goes to Buildings on Fire"

“Do Not Sell at Any Price tracks generations of obsessive collectors who dedicated their lives to the holy grail of blues and country music—78rpm records. Inspired by collectors like R. Crumb and Harry Smith, Amanda Petrusich wants each record ‘to keep playing forever, from somewhere deep inside my skull.’ Her book is essential reading for all who love American music.”
— William Ferris, author of "Blues from the Delta" and "The Storied South"

"An engaging and deeply personal journey, for both the writer and her subjects, and an adroit disquisition on the nature of this distinctly American form of insatiable lust."

“[A] thoughtful, entertaining history of obsessed music collectors and their quest for rare early 78 rpm records…Fascinating.”

“Ms. Petrusich goes on a pilgrimage to see and hear firsthand the legendary holdings of the top collectors…[she] brings a discerning eye to her profiles.”

“[Petrusich] weaves her interviews with personalobservations and just the right amount of dry humor to make us feel as if we’relooking (and listening) over her shoulder as she travels up and down the EastCoast…a propulsive read."

“Do Not Sell enticingly chronicles [Petrusich’s] immersion in a subset of record collectors…Her compelling, finely drawn portraits such as James McKune and Harry Smith amount to a rich study.”

“Captivating…Whether you’re already a 78 aficionado, a casual record collector, a crate-digger, or just someone like me who enjoys listening to music, you’re going to love this book…Elegant and witty.”

"Do Not Sell at Any Price is full of little epiphanies ... [Petrusich's] persistence pays off in the form of stories and observations that humanize the collectors and their pursuit ... [Petrusich] effectively uses the prism of her personal experience to analyze the aesthetics of collecting, consuming and enjoying music."

"A profound rumination on the idea of recording, asking what it means to capture sound, to be moved by it, and ultimately, to obsess over it. With “Do Not Sell at Any Price,” we have an astounding new writer not of musical criticism but of longform narrative prose. When Petrusich writes about music, she is akin Keats writing about a Greek vase: She is telling us what it means to be human beings adrift in time."

"In this entertaining book about the finite universe of oddballs who scrounge frantically to collect the shellac fossils the rest of us consider worthless, you get all the joy of discovery without having to grub through boxes at garage sales.... Petrusich proves an engaging, frequently funny tour guide."

"Full of strange, even beautiful, tales of obsession....Even someone who knows little or nothing about 78s will find Petrusich's book an incredibly enjoyable read."

“Petrusich’s personal journey through the lives and legacies of the ‘Blues Mafia’ reshuffles their twice-told stories and makes of them something new…excellent.”

"This book is so alive to its subject, to the grail of the music.... Petrusich will make you desperate not only to hear the records she’s writing about...but to feel the way they make her feel, to feel the mask dissolve on your own face.
— Greil Marcus

“Petrusich wisely and insightfully goes beyond just documenting these collectors’ peculiarities, as she also traces the history of early American recordings and their legacy in contemporary music. Perhaps most powerfully, the book serves as a treatise on the act of collecting itself, probing the psychological, social, and cultural implications arising from these pursuits of passion.”

"A travelogue into the most beautiful corners of obsession. Petrusich is a top-flight music writer—meticulous, generous, and deeply informed. But she’s also a terrific curator of human subjects, from the lovesick collectors who make up the bulk of her narrative to the towering, still-shadowy names that grace these circular hunks of shellac... Do Not Sell At Any Price is as idiosyncratic, alluring and totally alive as the scratchy sides that consume it."