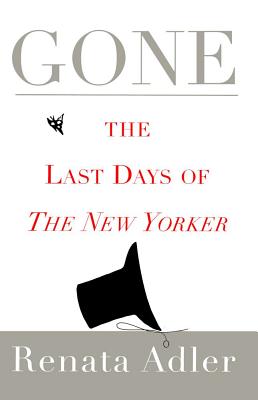 The Last Days of The New Yorker

From a legendary journalist and star writer at The New Yorker -- one of the most revered institutions in publishing -- an insider's look at the magazine's tumultuous yet glorious years under the direction of the enigmatic William Shawn.
Renata Adler went to work at The New Yorker in 1963 and immediately became part of the circle close to editor William Shawn, a man so mysterious that no two biographies of him seem to be about the same person. Now Adler, herself an unrivaled literary force, offers her brilliant take on the man -- and the myth that is The New Yorker -- disputing recent memoirs by Lillian Ross and Ved Mehta along the way.
With her lucid prose, meticulous eye for detail, and genuine love of The New Yorker, Adler re-creates thirty years in its history and depicts Shawn as a man of robust common sense, amazing industry, and editorial genius, who nurtured innumerable major talents (and egos) to produce a magazine that was -- and remains -- unique. Her ensemble cast -- all involved in legendary friendships, feuds, and love affairs -- includes Edmund Wilson, S. N. Behrman, Brendan Gill, Calvin Trillin, Dwight MacDonald, Donald Barthelme, Hannah Arendt, Pauline Kael, S. I. Newhouse, Robert Gottlieb, Tina Brown, and practically everyone of note in and around The New Yorker.
Above and beyond the fascinating literary anecdotes, however, Adler's is a striking narrative that follows the weakening of Shawn's hold over the magazine he loved, his reluctant attempts to find a successor, and the coup by which he was ultimately overthrown. It is a wonderful piece of reporting, full of real-life drama of Shakespearean dimensions, which Shawn himself surely would have loved.

Renata Adler has had an unrivaled career as a reporter, novelist, and short story writer; intellectual gadfly; and New Yorker staffer. Educated at Bryn Mawr, Harvard, the Sorbonne, and Yale Law School, she has been a Guggenheim Fellow, a Fulbright Scholar, a Woodrow Wilson Scholar, and the film critic of The New York Times. The author of prize-winning short stories, a prize-winning novel (Speedboat), a number of other highly praised books, and countless admired and controversial articles for The New Yorker, The New York Review of Books, The Atlantic Monthly, National Review, New Republic, and other publications, she lives in New York.
Loading...
or support indie stores by buying on