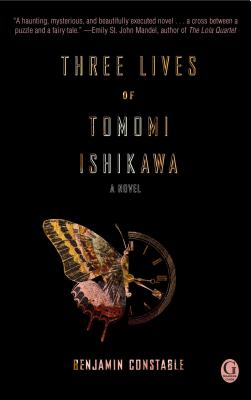 A new and enticing voice in fiction draws readers through the streets of Paris and New York on an intricate adventure. It’s twisting, contemplative, playful and darkly entertaining.

What writer Benjamin Constable needs is a real-life adventure wilder than his rampant imagination. And who better to shake up his comfortable Englishman-in-Paris routine than the enigmatic Tomomi “Butterfly” Ishikawa, who has just sent a cryptic suicide note?

She’s planted a slew of clues—in the pages of her journal, on the hard drive of her computer, tucked away in public places, under flowerpots, and behind statues. Heartbroken, confused, and accompanied by an imaginary cat, Ben embarks upon a scavenger hunt leading to charming and unexpected spaces, from the hidden alleys of Paris to the cobblestone streets of New York City.

But Butterfly’s posthumous messages are surprisingly well informed for the words of a dead person, and they’re full of confessions of a past darkened by insanity, betrayal, and murder. The treasures Ben is unearthing are installments of a gruesome memoir. Now he must draw a clear line between the real and surreal if he is to save himself, Butterfly, and what remains of their crazy and amazing friendship.

"Three Lives of Tomomi Ishikawa is a haunting, mysterious, and beautifully-executed novel. I couldn't put it down while I was reading it, and days later I find myself thinking of the characters, of the secret lives of Paris and New York, of the question of how well we ever really know our friends. Benjamin Constable's elegant debut reads like a cross between a puzzle and a fairytale."
— Emily St. John Mandel

haunting book as much about the creative process as it is about the characters."
— Kirkus

Benjamin Constable was born in Bristol and grew up mostly in Derby. He lives in Paris where he writes fiction and teaches English. Three Lives of Tomomi Ishikawa is his first novel.
Loading...
or support indie stores by buying on