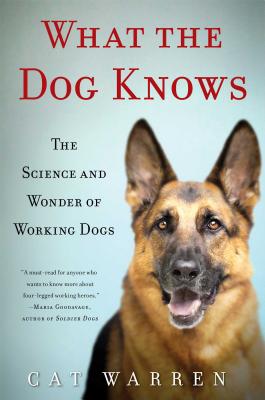 What the Dog Knows

The Science and Wonder of Working Dogs

A firsthand exploration of the fascinating world of “working dogs”—who seek out missing persons, sniff for explosives in war zones, and locate long-dead remains—through the experiences of a journalist and her canine companion, an incorrigible pup named Solo.

Cat Warren is a university professor and former journalist with an admittedly odd hobby: She and her German shepherd have spent the last seven years searching for the dead. Solo is a cadaver dog. What started as a way to harness Solo’s unruly energy and enthusiasm soon became a calling that introduced Warren to the hidden and fascinating universe of working dogs, their handlers, and their trainers.

Solo has a fine nose and knows how to use it, but he’s only one of many thousands of working dogs all over the United States and beyond. In What the Dog Knows, Warren uses her ongoing work with Solo as a way to explore a captivating field that includes cadaver dogs, drug- and bomb-detecting K9s, tracking and apprehension dogs—even dogs who can locate unmarked graves of Civil War soldiers and help find drowning victims more than two hundred feet below the surface of a lake. Working dogs’ abilities may seem magical or mysterious, but Warren shows the multifaceted science, the rigorous training, and the skilled handling that underlie the amazing abilities of dogs who work with their noses.

Warren interviews cognitive psychologists, historians, medical examiners, epidemiologists, and forensic anthropologists, as well as the breeders, trainers, and handlers who work with and rely on these remarkable and adaptable animals daily. Along the way, she discovers story after story that proves the impressive capabilities—as well as the very real limits—of working dogs and their human partners. Clear-eyed and unsentimental, Warren explains why our partnership with dogs is woven into the fabric of society and why we keep finding new uses for their wonderful noses.

Praise For What the Dog Knows: The Science and Wonder of Working Dogs…

"What the Dog Knows is a fascinating, deeply reported journey into scent, death, forensics and the amazing things dogs can do with their noses: sniffing out graves, truffles, bedbugs, maybe even cancer. But it's also a moving story of how one woman transformed her troubled dog into a loving companion and an asset to society, all while stumbling on the beauty of life in their searches for death."
— Rebecca Skloot, in the New York Times Book Review

“Warren writes with verve and provides rare insight into our working partnership with canines.”

“A beautifully written, fascinating, heartwarming, and oft-hilarious homage to working dogs. A must-read for anyone who wants to know more about four-legged working heroes. I'd like to shake Solo's paw for inspiring Cat Warren to write it.”
— Maria Goodavage, author of Soldier Dogs

“Move over CSI, and make way for Cat Warren and her forensic dog Solo to grab and keep your attention. What the Dog Knows is beautifully and compelling written—not only could I not put it down, I didn't want to.”
— Patricia B. McConnell, PhD, CAAB, author of The Other End of the Leash

“What the Dog Knows is a fascinating exploration into the minds and characters of some very special dogs. No one who cares about dogs should miss this smart, funny, and at times surprisingly moving book.”
— Spencer Quinn, author of Dog on It

“Enter the fascinating world of working dogs.”
— Temple Grandin, author of Animals in Translation and Animals Make Us Human

“Warren highlights the profound partnership developed between humans and dogs during their intense, but positive training, and in real situations. We are with her as she starts training her dog, and throughout the mistakes, triumphs, struggles, and rewards. I was entertained and educated—much of what I learned about dogs I had never encountered in any other book. …The people and dogs who inhabit this world are unforgettable.”
— Stacey O'Brien, author of Wesley the Owl

“The capabilities of these specially trained working dogs are remarkable. The author provides fascinating insider information about a meaningful partnership that has important legal and personal consequences.”
— Amy Hempel, author of Reasons to Live and The Dog of the Marriage

"What the Dog Knows is first the story of the relationship between a hard-working cadaver dog and his human companion. But that deeply-felt relationship opens the way to an exploration of the working dog world and in doing so becomes something more—a realization of the intelligence, determination, and decency of these animals, a story both wonderful and wise."
— Lee Smith, author of The Last Girls

“Working dogs, be they search and rescue, cadaver or explosive detection specialists, are—like their human partners—a breed apart. They inhabit a world of complete commitment, utter dedication, and extraordinarily rigorous training. What the Dog Knows is greatly enriched by author Cat Warren’s own love of digging. She and Solo take us on some fascinating detours through history and phony-baloney claims en route to the science, wonder and awe that all rightly surround dogs’ noses.”
— Sue Russell, author of Lethal Intent and The Illustrated Courtroom

“Warren’s painstaking research on the history and science of working dogs debunks myths and explains what is known–and how much remains unknown–about canine abilities and behavior. By combining this hard information with anecdotes about training Solo, accounts of searching the North Carolina woods for dead bodies, and the stories of other trainers and their dogs, she has produced a book that is both informative and entertaining. Although her love for Solo is palpable, she remains analytical and clear-headed, never romanticizing what he or other working dogs do.”
— Bruce DeSilva, Edgar Award-winning author of the Mulligan crime novels

“Cat Warren has captured both the magic and the best science behind the success of the modern working dog. This book masterfully shows how even the best technology cannot compete with our best friends. If you have ever wondered what dogs are truly capable of this is the book for you.”
— Brian Hare, evolutionary anthropologist and author of The Genius of Dogs

“What the Dog Knows is first the story of the relationship between a hard-working cadaver dog and his human companion. But that deeply felt relationship opens the way to an exploration of the working dog world and in doing so becomes something more—a realization of the intelligence, determination, and decency of these animals, a story both wonderful and wise.”
— Deborah Blum, author of Love at Goon Park and The Poisoner’s Handbook

“A gifted story-teller, Cat Warren takes us on a fast-paced journey into the scents—some foul, some sweet, some softer than a breeze—of police detective work. This is a book for anyone who loves dogs, and has watched them catch a scent on the wind or in the leaves on the ground, and wondered about that brilliant organ they possess: the nose.”
— Virginia Morell, author of Animal Wise

“In a series of accounts that sometimes read like detective stories, Cat Warren … takes us through the steps needed to create dogs that search for people—both living and dead—while describing her life and her special bond with a German shepherd named Solo.”
— Stanley Coren, author of Born to Bark and Do Dogs Dream?

“In this combination of history, science, and memoir, North Carolina State journalism professor Warren looks at the ways in which domestic animals have been able to assist humans, specifically the world of cadaver dogs, drug and bomb detecting police dogs, and tracking dogs. The author quickly gains the reader's sympathy with humorous accounts of her first days with Solo, the cadaver dog she's owned since birth, and earns the reader's respect with a well-researched chapter that calls into question much of the accepted and fluctuating statistics regarding dogs' superior sense of smell…. A welcome and necessary addition to the growing body of literature on the subject.”

“Warren writes . . . with the research-forward focus of an academic and the sweat-and-scabs storytelling of someone who has lived in the field. What the Dog Knows is an incredibly poignant book about dogs and people and how the lost can become found again.”

"Just finished What the Dog Knows, Cat Warren's wonderful new book about the training of her cadaver dog, Solo. This is a real treat for serious dog people: informative, compelling, moving, sad, funny, the works. I loved it."
— Carol Lea Benjamin, author of Dog Smart: The Art of Training Your Dog and Mother Knows Best: The Natural Way to Tr

"A former journalist, the author possesses a keen sense of detail and pacing that informs, entertains, and quickly draws readers into her life and work with Solo."

"More than a fascinating, inspiring look into the world of dogs and how dogs learn, What the Dog Knows illuminates--and celebrates!--the special bond we share with dogs. If you have ever loved a dog, you must read this book. I loved it!"
— Robert Crais, author of Suspect

“Delving into the history of working dogs, Warren mixes personal memoir with historical fact to present a fascinating and comprehensive work.”

“ 'People aresmart, just like dogs.’ Seriously, how do you not like a book that containsthat line? . . . Warren was a journalist, is now a professor, and knows her wayaround a sentence. She clearly cares about the subject and has invested a lotof time and effort into getting to know it, her style is engaging and charming(I was chuckling within a couple of pages), and she doesn’t mind showing herown failings and weaknesses. . . . Fascinating, entertaining, and educational —can’t ask for much more than that.”

Cat Warren is a professor at North Carolina State University, where she teaches science journalism, editing, and creative nonfiction courses. Before starting her academic career, Warren worked for newspapers across the United States, reporting on crime, poverty, and politics, from California to Wyoming to Connecticut. Warren started training her young German shepherd, Solo, as a cadaver dog in 2004. She and Solo were called to search for the missing across North Carolina for a number of years. She lives in downtown Durham, North Carolina, with her husband, David Auerbach, a retired professor of philosophy at North Carolina State University, and their two German shepherds. Visit CatWarren.com.
or support indie stores by buying on