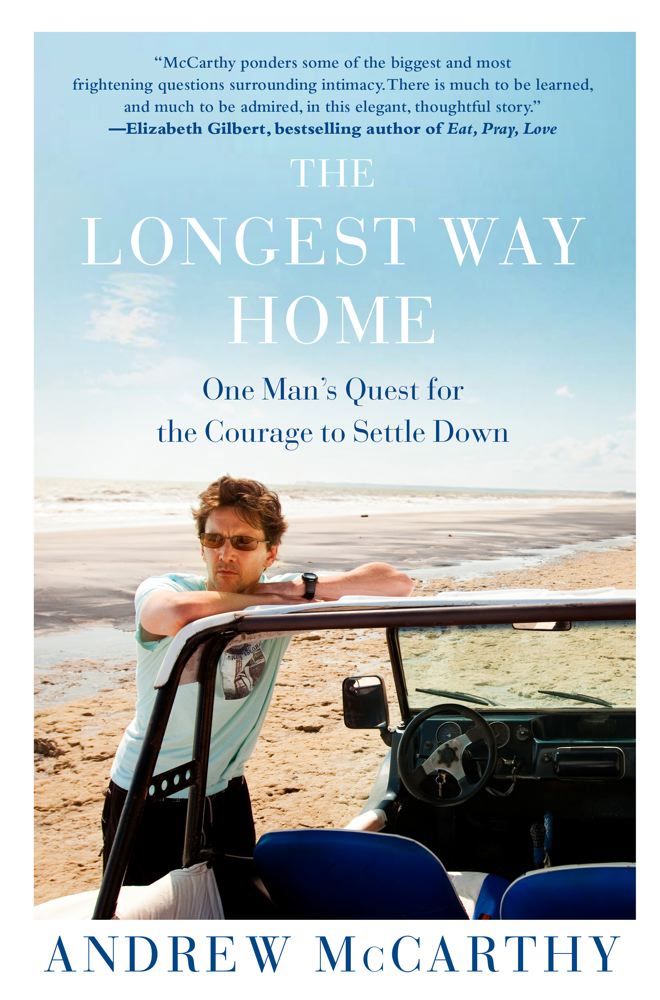 One Man's Quest for the Courage to Settle Down

Award-winning travel writer and actor Andrew McCarthy delivers a revealing and insightful memoir about how travel helped him become the man he wanted to be, helping him overcome life-long fears and confront his resistance to commitment.

WITH AN IRREPRESSIBLE TASTE for adventure, candor, and a vivid sense of place, award-winning travel writer and actor Andrew McCarthy takes us on a deeply personal journey played out amid some of the world’s most evocative locales.

Unable to commit to his fiancée of nearly four years—and with no clear understanding of what’s holding him back—Andrew McCarthy finds himself at a crossroads, plagued by doubts that have clung to him for a lifetime. Something in his character has kept him always at a distance, preventing him from giving himself wholeheartedly to the woman he loves and from becoming the father that he knows his children deserve. So before he loses everything he cares about, Andrew sets out to look for answers.

Hobbling up the treacherous slopes of Mt. Kilimanjaro, dodging gregarious passengers aboard an Amazonian riverboat, and trudging through dense Costa Rican rain forests—Andrew takes us on exotic trips to some of the world’s most beautiful places, but his real journey is one of the spirit.

On his soul-searching voyages, Andrew traces the path from his New Jersey roots, where acting saved his life—and early fame almost took it away—to his transformation into a leading travel writer. He faces the real costs of his early success and lays bare the evolving nature of his relationships with women. He explores a strained bond with his father, and how this complex dynamic shapes his own identity as a parent. Andrew charts his journey from ambivalence to confidence, from infidelity and recklessness to acceptance and a deeper understanding of the internal conflicts of his life.

A gifted writer with an unsparing eye, Andrew relishes bizarre encounters with the characters whom he encounters, allowing them to challenge him in unexpected ways. He gets into peculiar, even dangerous situations that put him to the test—with mixed results. Disarmingly likable, Andrew is open, honest, and authentic on every page, and what emerges is an intimate memoir of self-discovery and an unforgettable love song to the woman who would be his wife.

Praise For The Longest Way Home: One Man's Quest for the Courage to Settle Down…

“[The] reader gets to see the world in a way that only the author can show it and vicariously inhabit a self that only one person can be…. McCarthy achieves this with charm and credibility. . . [His] prose shines with intelligence and intimacy. . . . [This] soulful and searching book is ultimately that: a long, strange trip ion the direction of full-throttle love.”
— Cheryl Strayed


"Brave and moving...McCarthy’s keen sense of scene and storytelling ignites his accounts...[t]hreaded with an exemplary vulnerability and propelled by a candid exploration of his own life’s frailties."

“Andrew McCarthy treks from Baltimore to the Amazon, exploring his commitment issues as fearlessly as he scales Mount Kilimanjaro."

"This is not some memoir written by an actor who fancies himself a world traveler. McCarthy really is a world traveler – and a damned fine writer, too…To readers who think, “Andrew McCarthy? Really?” the answer is a resounding and emphatic yes. Really."

“Combining the best aspects of Paul Theroux’s misanthropy in books like Old Patagonian Express and Elizabeth Gilbert’s emotions in Eat, Pray, Love, [The Longest Way Home] is hard to put down.  Bound to be popular, this compelling and honest chronicle will not disappoint readers."

"It's hard to write books that are both adventurous and touching, but Andrew McCarthy manages to pull it off and more! A smart, valuable book." --Gary Shteyngart, bestselling author of Super Sad True Love Story and Absurdistan

“McCarthy delivers a deeply revealing memoir about settling down, both with a woman and in his own skin. An unflinchingly honest examination of his life as an actor, son, brother, husband, and father, as well as his struggle with commit­ting to a woman in his life whom he plans to—and does, by the end of the book—marry in Dublin. Alcoholism, infidelity, the dark side of celebrity—McCarthy holds nothing back. … he skillfully brings the locations and their characters to life. …Like the best travel, accompanying McCarthy on his road toward self-awareness and the woman he loves is much more about the journey than the destination.”

"Rarely have I seen the male psyche explored with such honesty and vulnerability. This is the story of a son, a father, a brother, a husband, a man who finds the courage not only to face himself, but to reveal himself, and, in so doing, illuminates something about what it is to be human, fully alive, and awake.” --Dani Shapiro, Author of Devotion

"Where lesser writers might reach for hyperbole and Roget to describe such exotic lands as Patagonia, Kilimanjaro and Baltimore, in The Longest Way Home, McCarthy leans on subtlety, a straightforward style and hard-won insights to allow his larger stories to unfold. It’s not hard to imagine him as the solitary figure in the café, scribbling in a notebook by candlelight, making the lonely, tedious work of travel writing look romantic and easy."--Chuck Thompson, author of Better Off Without 'Em and Smile When You're Lying

"As an actual voyage, McCarthy's globe-trotting tale is an evocative, highly entertaining read. But as an introspective and emotional journey, his story is unforgivingly honest, courageous, and hard to put down." --David Farley, author of An Irreverent Curiousity

"This book is the one that keeps you up later than you wanted and occupies your mind long after you put it down. It’s the kind of great writing that transforms my thoughts into its same cadence and has me suddenly writing my own stories in my head, attempting to pull something from the inspiration of incredibly detailed observations and well-turned phrases."
— The Beat of NJ blog