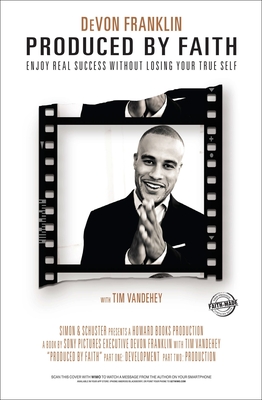 Enjoy Real Success without Losing Your True Self

Hollywood executive DeVon Franklin shows readers how to live and work their faith from nine to five, not just after quitting time.

Straight from Hollywood comes a dynamic business model for building a thriving career without compromising your faith. DeVon Franklin, vice president of production for Columbia Pictures, shares how being bold about his Christian faith while being driven and ambitious has actually worked in his favor to help him excel in a high-profile, fast-paced, competitive industry.

You are the movie. Produced by Faith parallels each step of the Hollywood film making process with the faith-making process God uses to turn your career into a success. You will discover that it is possible to be both wildly successful and completely committed to God—and that you will be even more successful when you place your faith at the center of your career. You can unleash the power of your faith as your greatest professional advantage and use the compass of God’s Word to guide you to your true passion and purpose in life. In this informative, inspiring book, DeVon reveals the secrets to maintaining your faith while advancing in your career. Here he shows you:

* How to discover The Big Idea for your life

* How to take your career to the next level

* How to stand firm on your Christian principles without compromise

* How to work with people who don’t understand your beliefs

* How to choose a profession, industry, or company that is in tune with your purpose

DeVon says, “I know from my own experiences that if you will put your career in God’s hands and trust Him, you can’t account for all the ways He will bless you. When you step out in faith, He will open doors and bring you opportunities that will surpass even your wildest expectations....If I have learned anything, it’s this: To get where you want to go, you’ve first got to become the person God wants you to be.”

Praise For Produced by Faith: Enjoy Real Success without Losing Your True Self…

"In the fifteen years I’ve known DeVon, he’s lived his life the same way he makes his movies: with commitment, humility, and a work ethic that demands respect. I’m honored to have been a part of his journey from stellar intern to studio vice president—his story is one to be shared with anyone chasing a dream."


“DeVon Franklin is a remarkable man of infectious enthusiasm and a sterling example that one can navigate through the complexities of life, even the verisimilitude of Hollywood, with clarity, purpose, and integrity.”


“Holding on to one’s faith while pursuing a dream, especially in the entertainment business, is no small feat. DeVon demonstrates this possibility beautifully and without compromise. The themes of DeVon’s book are great examples of how to pursue any career, not just within the movie business, and stay true to God.”


"After reading DeVon Franklin's book, Produced by Faith, I thought it would have been a great guide for my early life, but it's never too late for a book like this. Produced by Faith is a wonderful gift from an insightful, inspiring man."


“It takes faith to step out from obscurity into the glaring lights of Hollywood particularly as a man of faith. Not only does DeVon Franklin detail his astonishing ascension to the top of his craft, he shares how he did it to the glory of God and to the delight of blockbuster audiences around the globe. This book is a must-read for anyone seeking to strike that quintessential balance between faith and function. Hollywood, like life, is a walk of faith.”


“His book is designed to show readers how to honor their faith and still succeed in their careers. Franklin is doing just that in Hollywood.”

DeVon Franklin is an award­-winning film & TV producer, bestselling author, renowned preacher, and spiritual success coach. DeVon is the ultimate multi-hyphenate. With a commitment to uplifting the masses through entertainment, Franklin has quickly become a force in the media as well as a leading authority on faith, spiritual wellness, and personal development. Beliefnet has called him one of the “Most Influential Christians Under 40,” Variety named him one of the “Top 10 Producers to Watch,” Ebony has distinguished him as one of the “Top 100 Influential African Americans in America,” and even Oprah has called him “a bonafide dynamo...a different kind of spiritual teacher for our times.” Franklin serves as President/CEO of Franklin Entertainment, a dynamic multimedia entertainment company with a first-look film deal at 20th Century Fox. As a filmmaker, Franklin is producing the inspirational true story Breakthrough starring Chrissy Metz in theaters Easter of 2020. Additionally, he produced the hit animated film The Star and the hit film Miracles from Heaven. Along with his work as a producer, Franklin is the author of The Truth About Men, as well as The Hollywood Commandments, New York Times bestseller The Wait (cowritten with his wife, award-winning actress Meagan Good), and Produced by Faith. Live Free is his most recent book.
Loading...
or support indie stores by buying on