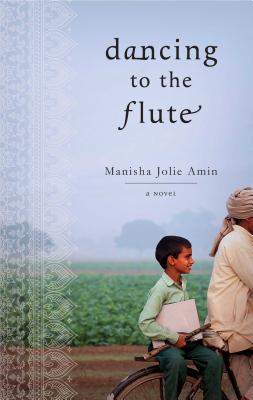 Dancing to the Flute

Masterfully evoking the breathtaking beauty of India, Manisha Jolie Amin’s lyrical debut novel follows a young boy whose life takes an unexpected turn when he is sent to live with a reclusive but renowned musician.

“Kalu picked up the flute by his side and started to play. The sound was deep and full, as if he were translating his thoughts into music. It stayed in the air like dust floating on the sunlight, and each note held the promise of something not quite spoken but maybe heard in the darkness of a dream.”

Abandoned as a young child, Kalu, a cheeky street kid, has carved out a life for himself in rural India. In the quiet village of Hastinapore, Kalu has also found friends: Bal, the solitary boy who tends the local buffaloes, and Malti, a gentle servant girl, who with her mistress, Ganga Ba, has watched over Kalu since he first wandered into the small town.

One day, perched high in the branches of a banyan tree, Kalu chooses a leaf, rolls it tightly, and as he’s done for as long as he can remember, blows through it. His pure, simple notes dance through the air and attract a traveling healer, whose interest will change Kalu’s life forever, setting him on a path he would never have dreamt possible and testing his belief in himself and his sense of identity.

Rich in texture and atmosphere, Dancing to the Flute is a heartwarming story of a community’s joys and sorrows, the transformative powers of music, the many faces of friendship, and a boy’s journey, against all odds, to become a man.

Praise For Dancing to the Flute: A Novel…

“Delicate, sometimes meditative and rich with allusions to India’s spirit as expressed through music, the novel offers readers color and culture, poverty and riches, through every sensory perception. A lyrical meditation on love, friendship and finding bliss in destiny."
— Kirkus Reviews

"A novel whose joys are to be found in a slow, sensory build-up."
— Booklist

“Amin weaves a lovely and subtle tale of music’s power and magic, using elements of traditional raag forms as the basis for the novel’s structure. Though primarily an uplifting tale, one in which Kalu makes for a charismatic protagonist despite himself, Amin provides an oft-unseen glimpse of the realities of life in contemporary rural India."
— Publishers Weekly

Manisha Jolie Amin was born in Kenya to Indian parents. Though her family immigrated to Australia when she was a young girl, she grew up listening to her mother tell her and her sister mythical tales about India while her father played the Indian flute. Today, she lives in Sydney, Australia.
Loading...
or support indie stores by buying on