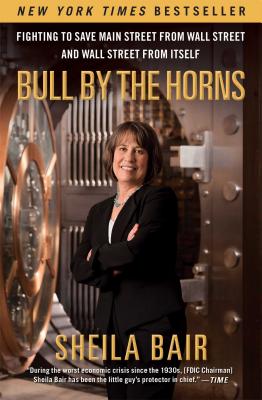 Bull by the Horns

The former FDIC chairwoman, and one of the first people to acknowledge the full risk of subprime loans, offers a unique perspective on the financial crisis.

Appointed by George W. Bush as the chairman of the Federal Deposit Insurance Corporation (FDIC) in 2006, Sheila Bair witnessed the origins of the financial crisis and in 2008 became—along with Hank Paulson, Ben Bernanke, and Timothy Geithner—one of the key public servants trying to repair the damage to the global economy. Bull by the Horns is her remarkable and refreshingly honest account of that contentious time and the struggle for reform that followed and continues to this day.

“When Sheila Bair took over as head of the U.S. Federal Deposit Insurance Corp. in 2006, the agency was probably better known for the ‘FDIC’ logo on the doors of the nation’s banks than for anything it did. Now Bair is at the center of the financial crisis, speeding the takeover of failing banks and pressing the mortgage industry to ease loan terms. . . . winning praise from Democrats and Republicans.”
— Bloomberg News

“The FDIC’s influence has grown in the past year because of Ms. Bair’s willingness to challenge her peers, as well as her agency's central role responding to the financial crisis. Ms. Bair warned about the housing crisis before many of her colleagues.”
— The Wall Street Journal

“Bair is everything you'd want in a public servant: thoughtful, practical, independent-minded—a straight shooter with political savvy who can manage the details of policy without losing sight of the big picture. She's no grandstander, but she isn't shy about going public with concerns if she thinks it will help her inside game. She never forgets that her most important constituency isn't the thousands of banks she regulates but the millions of Americans who use them.”
— Steven Pearlstein

“During the worst economic crisis since the 1930s, Sheila Bair has been the little guy's protector in chief.”
— Time Magazine

“A crisp, telling and often funny narrative of the 2008 meltdown.”
— John Wasik

"Bull By the Horns is the story of financial calamity seen from the perspective of this public servant, rendered from detailed notes. We learn with whom she met, what was said, what decisions taken, and how things turned out….This is a book for aficionados of infuriating detail.
Yet beneath the froth of facts courses an epic struggle. It pits Sheila Bair and the civil servants of the FDIC on one side and [Timothy Geithner] on the other.”
— James Galbraith

“A useful, corrective addition to the already extensive literature on the crisis.”
— Foreign Affairs

Sheila Bair is the former Chairman of the FDIC (Federal Deposit Insurance Corporation). She has been covered—and lauded—everywhere from The New Yorker to The Washington Post to The Wall Street Journal, and in 2008 and 2009 Forbes named her the second-most powerful woman in the world. Prior to assuming her post at the FDIC, Bair served as assistant secretary for financial institutions at the US Department of the Treasury and as senior vice president for government relations of the New York Stock Exchange.
Loading...
or
Not Currently Available for Direct Purchase