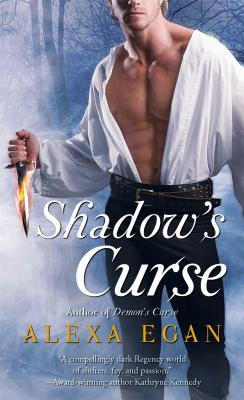 Can the magic of desire defeat the powers of darkness?

Forced by her half brother to use her dark gift of necromancy for profit, lovely Callista Hawthorne is determined to flee to her one chance for safety, her aunt in Scotland. With no hope of success unless she finds help on the long road north, she offers cursed shapechanger David St. Leger an irresistible bargain.

David—one of the mysterious Imnada—stalks the night streets of Regency London as a large black wolf. Renounced by his own kind, he spends his desperate rage on thieves and murderers. While Callista’s proposal will allow him to escape the terrible enchantment binding him, agreeing to her terms will force him into the treacherous world of the half-Fey Other, his clan’s ancient foes.

Drawn together by danger, David and Callista find passion in each other’s arms. But can they forswear the centuries of enmity separating their two races, and find a love they dare not even imagine?

"Egan brilliantly balances the paranormal aspects with a forbidden love while keeping the tension high and the passion and emotional intensity rising from beginning to end. If you haven’t read Egan yet, now’s the time to start."
— Romantic Times, 4-1/2 Stars

“Demon's Curse goes straight to the keeper shelf, and I'll make a place beside it for the sequels. One luscious, well told story.”
— New York Times bestselling author Grace Burrowes

"Egan weaves a compellingly dark Regency world of shifters, fey, and passion. A richly layered world with beguiling characters and an intriguing plot. Taut with suspense and mystery, this new series is not to be missed. Alexa Egan promises to be a star of the genre!"
— Kathryne Kennedy, critically acclaimed author of The Elven Lords series

"Nothing beats a well-done paranormal historical and this book is better than well-done. Riveting from the first page to the last, it's filled with characters I want to know better. Egan has created a world I can't wait to get back to!"
— Melissa Mayhue

"Sexy shifters, ancient blood feuds, and a heroine who won’t quit her man make DEMON’S CURSE a must read. I could not put it down!"
— Caridad Pineiro, USA Today bestselling author

“Newcomer Egan beautifully paces the slow evolution of Bianca and Mac’s relationship . . . The complex possibilities in the relationships between the races will leave readers eagerly anticipating future volumes.”
— Publishers Weekly

"Replete with dark, sensuous and honorable characters and a fast-paced, intricate plot, this highly romantic and exciting story is a winner. 4 1/2 Stars."
— Romantic Times