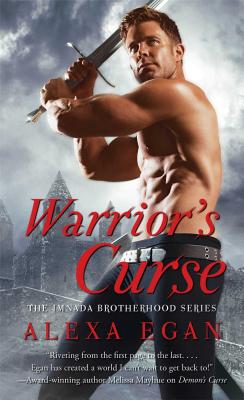 The third novel in the dark and sexy Imnada Brotherhood series about shape shifters in Regency-era England.

Major Gray de Coursy, Earl of Halvossa and exiled heir to the five clans of the Imnada shapechangers, must regain his throne in order to save his people from a deadly war with the Feybloods. First, however, he must break the curse he has lived under since the final chaos of Waterloo. Desperate, he resolves to steal the Imnada’s most sacred relic—the mysterious crystal of Jai Idrish—to help him. When he receives a visit from his childhood companion Meeryn Munro, Gray is surprised by her offer of help . . . and by how the girl of his memories has grown to become the woman of his dreams.

None of Meeryn’s powers as anointed keeper of Jai Idrish have prepared her for the threat of battle, but it’s the passion Gray arouses in her that she finds herself fighting. In a perilous quest spanning two realms, Gray and Meeryn must outwit and outrun a cunning enemy. And only the strength of the warrior, the magic of the priestess, and a love greater than death can reclaim a crown and win them a future together.

“Demon's Curse goes straight to the keeper shelf, and I'll make a place beside it for the sequels. One luscious, well told story.”
— New York Times bestselling author Grace Burrowes

"Egan weaves a compellingly dark Regency world of shifters, fey, and passion. A richly layered world with beguiling characters and an intriguing plot. Taut with suspense and mystery, this new series is not to be missed. Alexa Egan promises to be a star of the genre!"
— Kathryne Kennedy, critically acclaimed author of The Elven Lords series

“Nothing beats a well-done paranormal historical and this book is better than well-done. Riveting from the first page to the last, it's filled with characters I want to know better. Egan has created a world I can't wait to get back to!”
— Award-winning author Melissa Mayhue

"Sexy shifters, ancient blood feuds, and a heroine who won’t quit her man make DEMON’S CURSE a must read. I could not put it down!"
— Caridad Pineiro, USA Today bestselling author

“Newcomer Egan beautifully paces the slow evolution of Bianca and Mac’s relationship . . . The complex possibilities in the relationships between the races will leave readers eagerly anticipating future volumes.”
— Publishers Weekly

"Replete with dark, sensuous and honorable characters and a fast-paced, intricate plot, this highly romantic and exciting story is a winner. 4 1/2 Stars."
— Romantic Times