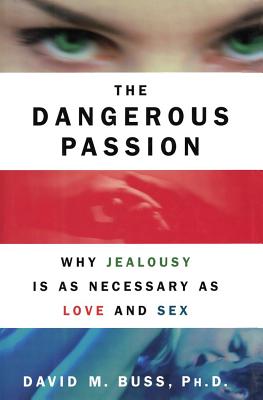 Why do men and women cheat on each other? How do men really feel when their partners have sex with other men? What worries women more -- men who turn to other women for love or men who simply want sexual variety in their lives? Can the jealousy husbands and wives experience over real or imagined infidelities be cured? Should it be? In this surprising and engaging exploration of men's and women's darker passions, David Buss, acclaimed author of The Evolution of Desire, reveals that both men and women are actually designed for jealousy. Drawing on experiments, surveys, and interviews conducted in thirty-seven countries on six continents, as well as insights from recent discoveries in biology, anthropology, and psychology, Buss discovers that the evolutionary origins of our sexual desires still shape our passions today.
According to Buss, more men than women want to have sex with multiple partners. Furthermore, women who cheat on their husbands do so when they are most likely to conceive, but have sex with their spouses when they are least likely to conceive. These findings show that evolutionary tendencies to acquire better genes through different partners still lurk beneath modern sexual behavior. To counteract these desires to stray -- and to strengthen the bonds between partners -- jealousy evolved as an early detection system of infidelity in the ancient and mysterious ritual of mating.
Buss takes us on a fascinating journey through many cultures, from pre-historic to the present, to show the profound evolutionary effect jealousy has had on all of us. Only with a healthy balance of jealousy and trust can we be certain of a mate's commitment, devotion, and true love.

Steven Pinker professor of psychology, MIT, and author of Words and Rules and How the Mind Works Not so long ago jealousy was considered a pointless, archaic institution in need of reform. But like other denials of human nature from the 1960s, this bromide has not aged well. David Buss applies his usual combination of insight, humor, and indefatigable experimentation to shed light on this most fascinating and horrifying of human emotions. Find out why the rock musician who wrote "If you love somebody set them free" also wrote "Every breath you take, I'll be watching you."

Helen Fisher author of The First Sex: The Natural Talents of Women and How They Are Changing the World Jealousy, infidelity, sexual desire: psychologist David Buss offers a compelling evolutionary perspective on these powerful and universal human emotions. It's a fascinating read. And along the way we are treated to an array of intriguing scientific data about other creatures, other cultures, Americans of all ages, and the differences between the sexes. This book goes a long way toward explaining the primordial underpinnings of the human heart.

David M. Buss, Ph.D., is a professor of psychology at the University of Texas, Austin, and previously taught at Harvard University and the University of Michigan. He is the author of the highly praised The Evolution of Desire and is internationally known for his expertise on sex, emotions, and the strategies of human mating. He lives in Austin, Texas.
Loading...
or support indie stores by buying on