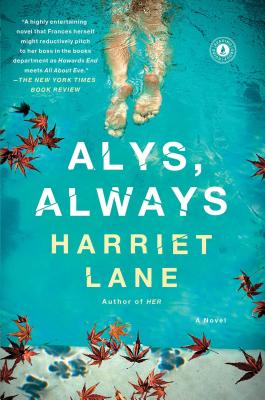 From the author of Her, a suspenseful, assured literary debut that explores the dark side of desire and ambition through one woman's unlikely entry into an elite world.

Driving home to London one winter evening, Frances happens upon a car that has flipped onto its side. She comforts the dying driver, Alys Kyte, and hears her final words. The wife of a celebrated novelist, Alys moved in rarefied circles, and when Frances agrees to meet the bereaved family, she glimpses a world entirely foreign to her: cultured, wealthy, and privileged. While slowly forging a friendship with Alys’s carelessly charismatic daughter, Frances finds her own life takes a dramatic turn, propelling her from an anonymous existence as an assistant editor for the books section of a newspaper to the heights of literary society.

With this unforgettable protagonist, author Harriet Lane draws readers into a tightly paced tale that careens towards an audacious ending. Transfixing, insightful, and unsettling, Alys, Always drops readers into the mind of an enigmatic young woman whose perspective on a glamorous world shines a light on those on the outside who would risk everything to be accepted.

"Controlled and precise, Lane’s writing bewitches with its undertones of implied meanings and carefully hidden secrets. This is a gem."
— Kirkus (starred review)

"This novel begins with a bang and delivers all sorts of surprises, but manages some accute and moving observations.. .A very fine debut. Lane works out her dramatic premise with great originality."
— The Times (UK)

"Wonderfully observed...This is a gripping, psychologically complex achievement, whose greatest success is its lingering sense of unease."
— The Telegraph (UK)

"Exceptional... In Frances [Lane] has created a character Daphne du Maurier might have been proud of: vulnerable, manipulative, resourceful, chippy, but one of us."
— Financial Times (UK)

"This chilling and accomplished debut is in classic Ruth Rendell territory. Crucially, the author knows the trick of what to leave out, and of how to tantilise."
— The Independent (UK)

"A superbly disquieting psychological thriller... Lane is a formidable wordsmith, and the literary world is conjured up in all its delicous, gossipy hierarchy.... Mordantly funny, yet chilling, this tale of an ordinary woman inveigling her way into a position of power is compulsive reading."
— The Spectator (UK)

"Superbly, even poetically written with an almost feverish hyper-realism, this All About Eve for our times misses no telling detail... A brilliant idea, brilliantly realized. I loved it, loved it. I've run out of superlatives and all that remains to say is that I wish I was you; I wish I hadn't read it and had that pleasure to come."
— Daily Mail (UK)

Harriet Lane has worked as an editor and writer at Tatler and the Observer. She has also written for the Guardian, the Telegraph, and Vogue. She lives in London, England. Alys, Always is her first novel.

When Sergeant Kate Williams first calls Frances about meeting the Kytes, Frances immediately declines “without having to reflect.” Why didn’t Frances want to meet the family initially? How do you view her sudden reversal after realizing that “Alice Kite” was really Alys Kyte, wife of the famous writer, Laurence Kyte?

Compare Laurence’s character with the themes Frances describes as permeating his books: “In Kyte’s books, middle-aged, middle-class men…struggle with the decline in their physical powers, a decline which mirrors the state of the culture around them. Kyte’s prose is famously ‘challenging,’ ‘inventive,’ and ‘muscular’; usually it’s ‘uncompromising,’ too.” Does this description of Laurence’s prose suit his person as well?

“…Maybe it’s not really lying if you barely know you’re doing it. It should be true. It’s the way it should be, in an ideal world.” This thought occurs to Frances after hearing her mother lie to her friends about the dog, Margot; but Frances seems to apply this rationale to her own life. Reflect on the scene when Frances meets the Kyte family for the first time. Why does Frances lie to the Kytes about Alys’s last words? What effect do Frances’s words have on the Kytes? If placed in a similar situation what would you choose to do? This is the first lie Frances tells, but she continues to mislead people throughout the novel. What other lies does Frances, or any other character, tell? Discuss how lying affects the trajectory of Alys, Always.

At work, Frances misrepresents her relationship with the Kytes to her boss, Mary Pym. Outside of work, Frances makes herself available to Polly as a confidant and friend. Why does Frances begin to manipulate the people around her? Discuss other moments in the narrative when Frances suggests she has hidden motives in mind. Does her motivation for deceit ever change?

When Polly tells Frances about the fight she overheard between her parents, neither woman is sure what Alys meant by her words: “And you can change the dedication while you’re at it…It’s not a tribute, it’s an insult.” What did you first suspect upon reading Polly’s account of this fight?

The first night Frances stays at the Kytes’ house in Biddenbrooke she is very perceptive about how Honor feels about Teddy: “You’re getting bored, aren’t you? And you can’t quite bring yourself to admit it yet.” Discuss other instances where Frances successfully “reads” other characters. How does this intuition help her?

What do you learn about Frances from her visits to her parents’ home? Compare the family scene at the Thorpe house with the family dynamic at the Kytes. How does Frances fit into each scenario?

“…If I overthink, events will feel rehearsed, and that would be no good at all. So I run through the possibilities, trying not to get snagged down by details. It’s a bit like making pastry. Light, cool hands, no hurry, lots of air. Wait for the moment when the texture changes.” In this passage Frances likens her actions to making pastry; discuss other points in the narrative when “the texture changes” and Frances moves forward towards her goals. To begin with, consider the scene where Frances is literally making a pastry—an apple tart. She feels the flour change “as it gains weight and texture.” How is this night a pivotal point in the novel?

For the most part, Frances exhibits disciplined self-control over her emotions and anxieties. Are there any moments when she reveals her weaknesses? How do you interpret the dream Frances has the night before she leaves Nevers?

Frances often looks at her reflection and considers not only how she feels about herself, but also how she appears to others. For example, before and after Julia Price comes to the Questioner office Frances looks at herself in the elevator doors. Her assessment is initially positive: “I still have my healthy summer color, and my new haircut suits me,” but after observing Julia, “the eyes, the smile, the air of assurance. The whole package,” Frances judges herself again and thinks, “this time I’m not quite so pleased with what I see.” What do you think Frances means by the “whole package”? How does Frances’s image of herself change over the course of the novel? Does she have the “whole package” by the conclusion? Find other moments when Frances compares herself, positively or negatively, to other characters, or tries to imagine herself from someone else’s perspective. Does this habit reveal anything about Frances?

Alys appears only in the very first scene, but Frances feels her presence at multiple points in the story—especially in the Kyte country home: “Alys is everywhere, too. At the back of drawers, under the stairs, in the greenhouse when I’m picking her tomatoes…Some mornings, everything I look at seems to refer backwards, to the past, to her.” Why do you think Frances feels Alys’s presence so acutely? Why is she so drawn to Alys’s material belongings?

When Frances visits her parents, Stewart Pearson, a family friend, calls Frances “a survivor.” Oliver repeats this description towards the end of the novel: “You’re a survivor, aren’t you.” Discuss the ways Frances is a survivor in the novel.

When Frances and Laurence finally get together, Frances realizes that she has not thought or planned her next move: “Laurence has knocked me off-balance. Somehow, I hadn’t fully anticipated this. Over the preceding months, he’d come to represent so many things, and as a consequence the man himself had somehow lost definition, become easy to overlook.” What did Laurence represent for Frances? And how has that changed now that they have begun a relationship? Do you think Frances expected to find herself “falling for him”?

Examine the mysterious scene when Frances volunteers to read to Mrs. Brewer, the same blind woman to whom Alys read. Even though it pains Mrs. Brewer to continue hearing the book Alys left unfinished, Frances goes on reading it without regard for her listener. Why does Frances go out of her way to follow in Alys’s footsteps here? Why doesn’t she respect Mrs. Brewer’s wish to read something else?

Do you think Frances was justified in accidentally leaving her scarf for Polly to find? What about dialing Polly’s number from Laurence’s phone? Why or why not?

At the beginning of the novel, Frances sees herself as anonymous and insignificant. By the end of the novel, Frances has a new job, connections, and the love of Laurence. When she runs into Oliver at a party he says, “But everyone wonders where you’ve come from.” Both Laurence and Polly ask her the exact same question independently of each other. Why do Oliver, Laurence, and Polly all ask Frances this question? How is the question different each time, depending on who asks it? How is it similar?

Read “How to Lie, Cheat and Manipulate Your Way to the Top” by Reading Group Choices' Neely Kennedy for discussible topics and themes!