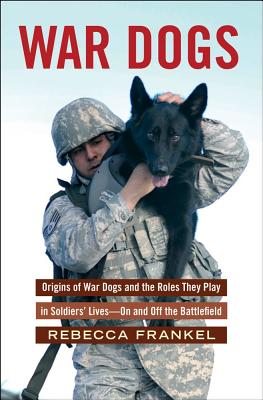 Growing out of the most-read piece in the history of Foreign Policy, receiving 11.2 million page views, War Dogs is even more vivid and comprehensive than the New York Times bestseller, Soldier Dogs. This riveting exploration of dogs in the military takes you behind the scenes and onto the front lines with the U. S. military’s canine units.

For more than 100 years, dogs have fought alongside U.S. soldiers on and off the battlefield, accompanying troops on all their missions from parachute deployment to bomb clearance. In War Dogs, journalist Rebecca Frankel delves into the remarkable realm of these specially trained canines, drawing on her own extensive, on-the-ground reporting to provide a full understanding of what dogs and their human compatriots go through day after day under fire—and the striking bond that evolves between them. Frankel explores this full-circle relationship even as it extends beyond war with therapy dogs—canines healing the wounds of combat, both physical and psychological. From the Civil War to the War on Terror, dogs’ role in military missions has remained one of the most intriguing—and most effective—weapons in the arsenal of modern warfare. And while the United States is winding down its involvement in two wars and military funds dwindle, Frankel makes a passionate case for keeping war dog programs as a permanent and well-funded military force.

Full of stories of heartrending heroics and photographs throughout, War Dogs is informative, emotional, and astounding. Read it along with your best four-legged friend.