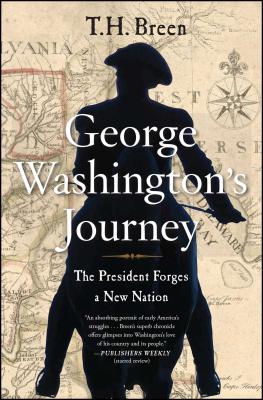 The President Forges a New Nation

An exciting introduction to a George Washington we rarely see, a president who strategically traveled to all thirteen states and transformed American political culture. “Breen’s clearly written account of these sojourns give readers a fresh understanding of the president’s personality, his public and private lives, and the political and social climate of the time” (Library Journal).

During his first term as President, George Washington made arduous journeys to each of the thirteen new states. He understood that Americans did not yet feel part of a nation, and that he alone could bring them to that conviction. For Washington, the stakes were high. In scores of communities, he communicated a powerful and enduring message—that America was now a nation, not a loose collection of states. And the people responded to his invitation in ways that he could never have predicted.

In George Washington’s Journey, T.H. Breen introduces us to a George Washington we rarely meet. By nature shy and reserved, the brand new president decided that he would visit the new citizens in their own states, that only by showing himself could he make them feel part of a new nation. He displayed himself as victorious general (he wore his regal uniform and rode his white stallion) and as President (grand dinners, military parades, arcs of triumph, and fancy balls). He travelled by open carriage on terrible roads, in awful weather, staying and eating at lousy inns.

Breen takes us on Washington’s journeys. We see the country through his eyes and listen through his ears. Washington drew on his immense popularity, even hero worship, to send a powerful and lasting message—that America was now a nation, not a collection of states. In George Washington’s Journey, we come to understand why the first presisdent is the indispensable Founding Father.

T.H. Breen is currently the James Marsh Professor at-large at the University of Vermont. He is the author of eleven books on U.S. History, many of them prizewinners.
or
Not Currently Available for Direct Purchase
Copyright © 2020 American Booksellers Association