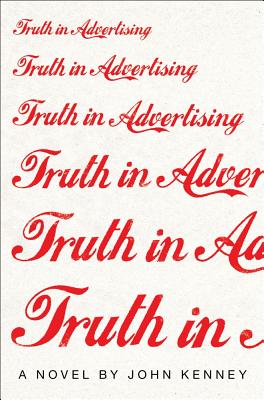 “This funny first novel is an accomplished mix of snark and pathos. Finbar Dolan is nearly 40 and has little to show for it. He is ambivalent about his Madison Avenue advertising job, has a failed engagement behind him, and is emotionally distant from his fragmented and dysfunctional family. What he does have, however, are loyal friends, a good heart, and a razor-sharp wit. This book will not only have you laughing out loud but will also leave you keenly sympathetic to Fin's plight. It is funny and moving and reminiscent of the works of Jonathan Tropper and Nick Hornby with a little Mad Men thrown in.”
— tova beiser, Brown University Bookstore, Providence, RI
View the List

A wickedly funny, honest, and poignant debut novel in the spirit of Then We Came to the End and This Is Where I Leave You about the absurdity of corporate life, the complications of love, and the meaning of family.

“F. Scott Fitzgerald said that there are no second acts in American lives. I have no idea what that means but I believe that in quoting him I appear far more intelligent than I am. I don’t know about second acts, but I do think we get second chances, fifth chances, eighteenth chances. Every day we get a fresh chance to live the way we want.”

FINBAR DOLAN is lost and lonely. Except he doesn’t know it. Despite escaping his blue-collar Boston upbringing to carve out a mildly successful career at a Madison Avenue ad agency, he’s a bit of a mess and closing in on forty. He’s recently called off a wedding. Now, a few days before Christmas, he’s forced to cancel a long-postponed vacation in order to write, produce, and edit a Super Bowl commercial for his diaper account in record time.

Fortunately, it gets worse. Fin learns that his long-estranged and once-abusive father has fallen ill. And that neither of his brothers or his sister intend to visit. It’s a wake-up call for Fin to reevaluate the choices he’s made, admit that he’s falling for his coworker Phoebe, question the importance of diapers in his life, and finally tell the truth about his past.

Truth in Advertising is debut novelist John Kenney’s wickedly funny, honest, at times sardonic, and ultimately moving story about the absurdity of corporate life, the complications of love, and the meaning of family.

Praise For Truth in Advertising: A Novel…

A Book Riot Funniest Novel of the Year

“The protagonist, Finbar Dolan, is Don Draper stripped of all his glamour, success and pomade. What Fin, a midlevel copywriter, does have on Don is a sense of humor. . . . Framed around a surprisingly sweet romance, as well as Fin’s eventual confrontation with his painful family history, this debut offers a pleasing lightness-to-heart ratio.”

“Peppered with colorful impressions of New York City life, Truth in Advertising is a quick-witted, wry sendup of the advertising industry and corporate culture. . . . Delivers a clear-eyed, sympathetic story about complex family ties and the possibility of healing.”

“[Kenney’s] insights are dead-on. . . . [His] plot is perfectly balanced between the insanity of both work and family, and the ending is satisfying without being saccharine. . . . Engaging and entertaining . . . The joy is in the journey, of spending time with a character that is, at times, annoying and thoughtful,arrogant and scared, childish and mature — in other words, someone like the rest of us.”

“You'd expect that a man who writes humor pieces for the New Yorker would be funny – and he is. John Kenney, who also worked as an advertising copywriter, knows that world and skewers it mercilessly and hilariously in his debut novel. . . . It would also be safe to say that amazing things will most likely be happening in John Kenney's literary career right now. Truthfully.”

“Truth in Advertising has a cinematic sense of motion. . . . [Kenney is] a naturally comic author who has created a likeable narrator in Fin Dolan. . . . Humor springs from a deep well of family-induced anguish, and soon enough comedy and tragedy are braided throughout the narrative.”

“This debut novel reads at times like a laugh-out-loud standup routine. What sustains it, though, is much more substantial: an engaging, believable plot, a fascinating if jaundiced view inside the contemporary world of New York advertising, and most of all, a lead character you're glad you get to know. . . . It's a measure of Kenney's writing talent that the regular gusts of delicious, smart-alecky ad agency banter among Dolan and his witty comrades and the painful-to-read scenes depicting the toxic relations among siblings feel equally real in this novel. . . . [A] smart, cinematic story.”

"Kenney, who’s worked as a copywriter for 17 years, mines this rich territory for satire. . . . Fin’s struggle to understand his dad brings a layer of emotional complexity to the tale. . . . Kenney’s novel wrestles with deep questions: What makes a good man? What makes a good life? What should one’s contribution to the world be?"

“In this Nick Hornby-esque fiction debut, midlife crisis and family tragedy force a 39-year-old ad man to reevaluate his priorities.”

“A lively debut that has ‘movie deal’ written all over it.”

"Here's a smart one. . . . Lovers of the city will find much to love in this relatable, redemptive, and sometimes very funny story."

“It's the stuff of Jonathan Tropper novels and Judd Apatow films and every Zooey Deschanel fantasy.”

“The rare novel that's truly cinematic. It is sexy, the plot twists in just the right places; simply put, it's untamable. You will laugh almost as much as you will relate to the plight of the protagonist.. . . This book might just rouse the creative genius in you, too.”

"Hilarious. . . . Kenney mixes inside advertising jokes with the broad comedy necessary to keep those in the real world laughing."

“[A] comedic send-up of the ad industry's self-importance, as narrated by a good-hearted if skeptical underachiever . . . A pleasure to read.”

"What really amazed me was the unexpected depth and subtleness of the rest of the book, which showcases writing that, in terms of talent, puts Kenney in a league with the best of American writers of his generation."

"New York-based Kenney . . . knows of what he speaks. He is particularly brilliant at clashing Fin’s jadedness with the unglamorous products he’s forced to pitch. . . . [A] delightfully caustic piece of satire."

"It will make you laugh out loud at times and it will also touch you deeply. . . . This is the sort of book where you really care about the characters. . . . You will not be disappointed in Truth in Advertising. The plot is highly entertaining, but it is the joy of getting to know such a realistic, likeable, believable character as Finbar Dolan that makes this novel such a treat. Fin is the sort of guy you will enjoy spending time with.”

"A snortingly funny debut ... Although Nick Hornby is the obvious reference — humor and heartbreak of ordinary life — this wonderful book is more J. Alfred Prufrock."

"With wry humor, always on point, Kenney guides us through the maze of work, family, love (elusive) and friendship (a lifesaver). This is an outstanding debut."

"A masterful blend of wit and seriousness, stunning in its honesty. A novel sure to appeal to fans of Nick Hornby."

John Kenney has worked as a copywriter in New York City for seventeen years. He has also been a contributor to The New Yorker magazine since 1999. Some of his work appears in a collection of The New Yorker’s humor writing, Disquiet, Please! He lives in Brooklyn, New York. Visit ByJohnKenney.com.

Truth in Advertising pokes fun at the advertising industry, yet often makes a case for it being an underappreciated art form. Do you think there is artistic value in advertising? Can you think of an example of an ad campaign or commercial that might be considered aesthetically important?

Fin’s relationship with his father was volatile and complicated. Is it always necessary, or possible, to forgive those who have done us so much damage in the past? Is there ever an excuse for cutting ties with a parent?

At different points throughout the novel, Fin has imaginary interviews with Terry Gross, Barbara Walters, and Oprah. What function does this device serve? Do you think it’s effective?

Why do you think the author waits so long to reveal that Fin was present when his mother died? What does this revelation teach the reader about Fin? Do you think he was right to keep this secret to himself for so many years?

In today’s media-saturated culture, individuals are often encouraged to “brand” themselves using Facebook, Twitter, and other social media networks. How would you define the difference between a person’s “brand” and their personality? What is Fin’s brand?

Of all the Dolan children, why do you think Fin is the only one who agrees to scatter their father’s ashes? Is this act merely symbolic? Or do you really think it helps him resolve some of his anger toward his father?

Fin notes that both Phoebe and Pam are friends who “understand what you mean, not what you say” (p. 232) Why is this important to Fin?

Oftentimes tragedies bring families closer together. In the Dolans’ case, their father’s death initially just serves as a reminder of their troubled childhood and how far apart they’ve grown. What makes them incapable of finding solace in each other, and how do you think this has changed by the end of the novel?

Fin frequently complains about being dissatisfied with his job, yet he remains unable to leave. What aspects of the advertising industry does he find so compelling even as he struggles to justify staying in it? He talks about advertising being based on mythology and lies. What are some societal myths about happiness and success that Fin buys into and why do you think these are ultimately unable to satisfy him?

Phoebe and Fin play a game where they point out one beautiful thing they see each day. How does Fin’s relationship with Phoebe and the game they play affect the way he deals with his own anger and pain? Do you think there is beauty even in tragedy?