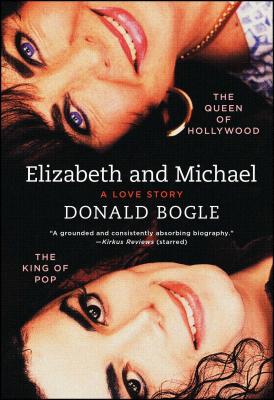 Discover the unique, profound, and unlikely yet enduring friendship between two of the most prominent and beloved celebrities of all time—Elizabeth Taylor and Michael Jackson—in this “exhaustively researched…consistently absorbing” (Kirkus Reviews, starred review) biography.

From the moment Elizabeth Taylor and Michael Jackson met, they were fascinated by one another. He peered into her violet eyes and was transfixed; she, in turn, was dazzled by his talent, intrigued by his sweet-tempered childlike personality, and moved by the stories she had already heard about his troubled early life. Soon a deep friendship blossomed, unlike anything either had ever experienced. Through their various emotional upheavals, the peaks and valleys of their careers, their personal traumas and heartaches, their countless health issues and extreme physical pain, and the glare of the often merciless public spotlight, their love for each other endured.

Award-winning biographer Donald Bogle skillfully re-creates the moving narrative of “these two forces of nature, and digs into the extraordinary histories that made them uniquely suited to understanding each other” (Alan Light, author of Let’s Go Crazy). Through the recollections of friends and acquaintances of the two stars, as well as credited and anonymous sources, Elizabeth and Michael emerges as a tender, intimate look at this famous “odd couple”—and a treasure to their millions of fans.

Praise For Elizabeth and Michael: The Queen of Hollywood and the King of Pop—A Love Story…

"The friendship between Michael Jackson and Elizabeth Taylor seemed both impossible and inevitable. In Elizabeth & Michael, Donald Bogle explores and explains the irresistible attraction between these two forces of nature, and digs into the extraordinary histories that made them uniquely suited to understanding each other."
— Alan Light, author of Let's Go Crazy: Prince and the Making of Purple Rain

"A surprisingly comprehensive, sensitive and entertaining look at Taylor and Jackson, and not just their friendship . . . Bogle has, essentially, written three books in one: Taylor's biography, Jackson's and the tale of their mutual coming together, the how and why . . . . The writer knows his subjects and his back-and-forth joint bios of Taylor and Jackson are extremely well done."
— Liz Smith, New York Social Diary

“Exhaustively researched…with a fresh and fair-minded perspective…Devoted fans of either star may be familiar with much of this material, but they will appreciate the balance and compassion underscoring Bogle's treatment. A grounded and consistently absorbing biography.”

“Entertainment biographer Bogle here offers a thoughtful overview of the lives of Michael Jackson, filling a significant gap in celebrity biographies ... Bogle excels at drawing explicit parallels between Taylor and Jackson’s lives, especially when he relates both stars’ early lives in alternating chapters. Bogle presents them as true soulmates, linked by both celebrity and shared experience."
— Publishers Weekly

Donald Bogle, one of the foremost authorities on African Americans in film and in entertainment history, is the author of eight books, including the classic Toms, Coons, Mulattoes, Mammies, and Bucks: An Interpretive History of Blacks in American Films as well as two highly acclaimed, groundbreaking biographies: the bestseller Dorothy Dandridge: A Biography and Heat Wave: The Life and Career of Ethel Waters. He adapted his book Brown Sugar: Over One Hundred Years of America’s Black Female Superstars into a four part documentary series for PBS. Bogle has also appeared on numerous television and radio programs. He was a special commentator and consultant for Turner Classic Movies' award-winning Race and Hollywood series. He teaches at both the University of Pennsylvania and New York University’s Tisch School of the Arts.
Loading...
or
Not Currently Available for Direct Purchase