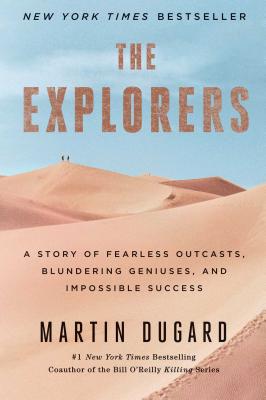 A Story of Fearless Outcasts, Blundering Geniuses, and Impossible Success

Learn to unlock your inner explorer in this riveting account of a great, forbidding adventure and “a fascinating examination of the seven key traits of history’s most famous explorers…[with] infusions of insight and enthusiasm” (Publishers Weekly, starred review).

In 1856, two intrepid adventurers, Richard Frances Burton and John Hanning Speke, set off to unravel a geographical unknown: the location of the Nile River’s source. They traveled deep into an uncharted African wilderness together, arrived at two different solutions to the mystery, and parted ways as sworn enemies. The feud became an international sensation on their return to England, and a public debate was scheduled to decide whose theory was correct. What followed was a massive spectacle with an outcome no one could have foreseen.

In The Explorers, New York Times bestselling author Martin Dugard shares the rich saga of the Burton and Speke expedition and guides readers through the seven traits that history’s most legendary explorers called on to survive their impossible journeys. In doing so, Dugard demonstrates that these traits have a most practical application in everyday life. We see St. Brendan the Navigator, driven by hope, sail into the unknown, and the curiosity that inspired John Ledyard to attempt to walk around the globe, and the perseverance Howard Carter needed to discover Tutankhamen’s tomb. From these and other examples, Dugard extracts lessons for unlocking the explorer in us all.

Martin Dugard is the New York Times bestselling author of Into Africa, The Training Ground, Last Voyage of Columbus, and The Explorers. He is also the coauthor, with political commentator Bill O’Reilly, of Killing Lincoln, Killing Kennedy, Killing Jesus, and Killing Patton. He lives in Southern California with his wife and three sons.

Praise For The Explorers: A Story of Fearless Outcasts, Blundering Geniuses, and Impossible Success…

"Using his usual brilliant research, Martin Dugard takes the reader on a thrill ride to some of the most dangerous places on earth. Can you handle it?" —“Bill O'Reilly

"A captivating introduction to the world of exploration. . . Dugard knows how to tell a good story and assembles a fascinating cast of characters.” — Columbus Dispatch

“Martin Dugard has written bestselling histories with Bill O’Reilly, and with me, but with The Explorers, he shows that he does his best work as a solo performer. The Explorers has a distinctive voice and the drama never flags from beginning to end.” —James Patterson

“An exciting and uplifting book, with inspiration on every page.”
—Seth Godin, author of The Icarus Deception
or support indie stores by buying on
(This book is on backorder)
Copyright © 2020 American Booksellers Association