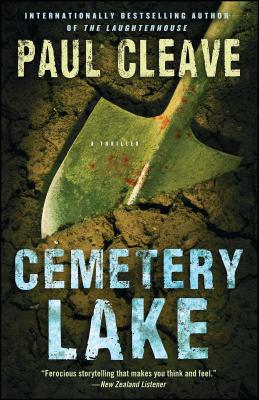 A chilling case of unsolved murders and mistaken identities unravels when a lake in a Christchurch cemetery releases its grip on the murky past in this exciting crime thriller from the internationally bestselling author of The Laughterhouse.

Cemetery Lake begins in a cold and rainy graveyard, where Private Detective Theodore Tate is overseeing an exhumation—a routine job for the weathered former cop. But when doubts are raised about the identity of the body found in the coffin, the case takes a sinister turn. Tate knows he should walk away and let his former colleagues on the police force deal with it, but his strong sense of justice intervenes.

Complicating matters are a few loose ends from Tate’s past. Even good guys have secrets, and Tate thought his were dead and buried for good. With time running out and a violent killer lurking, will he manage to stay one step ahead of the police, or will his truth be unearthed?

Originally published in Paul Cleave’s native New Zealand in 2008, Cemetery Lake is the first novel to feature Theodore Tate, the “quintessential flawed hero” (Kirkus Reviews) from Collecting Cooper and The Laughterhouse. Full of the clever plot twists and sardonic humor for which Cleave has become known, it is at once a totally entertaining crime novel and an unforgettable drama about the universal battle against the darkness within.

“Cleave is a powerful writer, conjuring a malevolent atmosphere, creating a relentless momentum propelling Tate deeper into a moral swamp.... Contemporary crime noir at its best, mined from the dark pit of the human psyche.”
— Kirkus Reviews

“Tate is hardly the first dark, brooding detective with a tragic past in crime fiction, but he brings a fresh twist to the familiar type, as does the setting of Christchurch, New Zealand, which Cleave evokes with masterful precision.”
— Booklist

“The myriad of characters presented in this novel is amazing.”
— Suspense Magazine

Paul Cleave is the internationally bestselling author of ten award-winning crime thrillers, including Joe Victim, which was a finalist for the 2014 Edgar and Barry Awards, Trust No One and Five Minutes Alone, which won consecutive Ngaio Marsh Awards in 2015 and 2016. He lives in Christchurch, New Zealand.
Loading...
or support indie stores by buying on