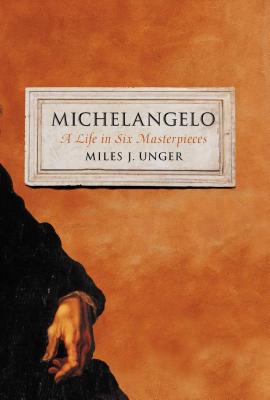 A Life in Six Masterpieces

The life of one of the most revolutionary artists in history, told through the story of six of his greatest masterpieces.

Among the immortals—Leonardo, Rembrandt, Picasso—Michelangelo stands alone as a master of painting, sculpture, and architecture. He was not only the greatest artist in an age of giants, but a man who reinvented the practice of art itself. Throughout his long career he clashed with patrons by insisting that he had no master but his own demanding muse and promoting the novel idea that it was the artist, rather than the lord who paid for it, who was creative force behind the work.

Miles Unger narrates the astonishing life of this driven and difficult man through six of his greatest masterpieces. Each work expanded the expressive range of the medium, from the Pietà Michelangelo carved as a brash young man, to the apocalyptic Last Judgment, the work of an old man tested by personal trials. Throughout the course of his career he explored the full range of human possibility. In the gargantuan David he depicts Man in the glory of his youth, while in the tombs he carved for the Medici he offers a sustained meditation on death and the afterlife. In the Sistine Chapel ceiling he tells the epic story of Creation, from the perfection of God’s initial procreative act to the corruption introduced by His imperfect children. In the final decades of his life, his hands too unsteady to wield the brush and chisel, he exercised his mind by raising the soaring vaults and dome of St. Peter’s in a final tribute to his God.

A work of deep artistic understanding, Miles Unger’s Michelangelo brings to life the irascible, egotistical, and undeniably brilliant man whose artistry continues to amaze and inspire us after 500 years.

Miles J. Unger writes on art, books, and culture for The Economist. Formerly the managing editor of Art New England, he was a contributing writer to The New York Times. He is the author of Picasso and the Painting That Shocked the World; The Watercolors of Winslow Homer; Magnifico: The Brilliant Life and Violent Times of Lorenzo de’ Medici; Machiavelli: A Biography; and Michelangelo: A Life in Six Masterpieces. Visit MilesJunger.com.

Praise For Michelangelo: A Life in Six Masterpieces…

"A deeply human tribute to one of the most accomplished and fascinating figures in the history of Western culture."
— Michael Washburn

“Provides insightful perspective on Michelangelo. . . . [Michelangelo] made some of the most enduring art in Western civilization and profoundly changed the way we think about artists. Thoughtful exploration of his work, which this book most definitely is, will always be rewarding."
— Travis Nichols

“Accessible and compelling. . . . Unger’s real focus is on how the political and ideological climate of Michelangelo’s day affected his art, and here he is authoritative and highly illuminating.”
— Adam Kirsch

“Unger insightfully guides readers through both Michelangelo's life and the culture and history of the times. . . . [He] displays keen, humane judgments in interpreting Michelangelo's life by focusing on his motives and talent. The artist's life was complicated, but Unger finds a narrative path that keeps the reader on course for an enlightened biography.”
— David Hendricks

“Unger is an astute critic and an able storyteller; his remapping of familiar territory should please both readers new to Michelangelo and those who think they know him inside out.”
— Ann Landi

“A masterful portrait of a dauntingly complex figure.”

“Unger excels at showing us the artist at work: his reluctance, his caginess, his temperament (easily hurt and angered, he sometimes tried to run away) and his jealousies (da Vinci and Raphael among them). . . . His edged prose shows us a clear Michelangelo emerging from the stone of history.”

“Unger has read extensively on each of the six creations in his focus, but more importantly, he’s also stepped back and looked at them, and that fresh outlook makes his book very lively reading. . . . It’s enormously intelligent and engaging contribution to the shelf and a perfect introduction to this most towering and problematic of all artists.”
— Steve Donoghue

“Author Miles J. Unger states Michelangelo was 'the prototype of the temperamental genius, beholden to no one and responsible only to the dictates of his own inspiration'. . . . The heart of Michelangelo is a full portrayal of this fascinating character, but the book also devotes a full chapter to each of his most famous works.”
— Helen Gallagher

"Mr. Unger is a good, popular art historian who understands the moods of the artist and his times."

“Part biography, part art analysis and thoroughly tantalizing. By focusing on six works, presented in chronological order, Unger presents a portrait of the artist that gives a panoramic view of Michelangelo’s life but also focuses keenly on putting the artwork itself in context, giving readers the whys and wherefores that provide a rich, provocative understanding.”
— Catherine Mallette

“This may be the one indispensable guide for encountering the artist on his home turf. There are hundreds of books about Michelangelo di Lodovico di Buonarroti Simone, his art and his times. But few bring it all together in such an entertaining and enlightening whole.”
— Bill Marvel

“Magisterial. . . . This fascinating new biography is highly recommended as a guide to anyone seeking to understand the immortal works of art created by this singular man.”
— Catherine Hollis
or
Not Currently Available for Direct Purchase
Copyright © 2020 American Booksellers Association