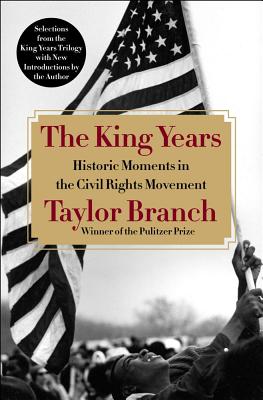 Taylor Branch, author of the acclaimed America in the King Years, introduces selections from the trilogy in clear context and gripping detail.


The King Years delivers riveting tales of everyday heroes who achieved miracles in constructive purpose and yet poignantly fell short. Here is the full sweep of an era that still reverberates in national politics. Its legacy remains unsettled; there are further lessons to be discovered before free citizens can once again move officials to address the most intractable, fearful dilemmas. This vital primer amply fulfills its author’s dedication: “For students of freedom and teachers of history.”

This compact volume brings to life eighteen pivotal dramas, beginning with the impromptu speech that turned an untested, twenty-six-year-old Martin Luther King forever into a public figure on the first night of the 1955 Montgomery Bus Boycott. Five years later, minority students filled the jails in a 1960 sit-in movement, and, in 1961, the Freedom Riders seized national attention.

Branch interprets King’s famous speech at the 1963 March on Washington, then relives the Birmingham church bombing that challenged his dream of equal souls and equal votes. We see student leader Bob Moses mobilize college volunteers for Mississippi’s 1964 Freedom Summer, and a decade-long movement at last secures the first of several landmark laws for equal rights. At the same time, the presidential nominating conventions were drawn into sharp and unprecedented party realignment.

In “King, J. Edgar Hoover, and the Nobel Peace Prize,” Branch details the covert use of state power for a personal vendetta. “Crossroads in Selma” describes King’s ordeal to steer the battered citizen’s movement through hopes and threats from every level of government. “Crossroads in Vietnam” glimpses the ominous wartime split between King and President Lyndon Johnson. As backlash shadowed a Chicago campaign to expose northern prejudice, and the Black Power slogan of Stokely Carmichael captivated a world grown weary of nonviolent protest, King grew ever more isolated. As Branch writes, King “pushed downward into lonelier causes until he wound up among the sanitation workers of Memphis.” A requiem chapter leads to his fateful assassination.

Praise For The King Years: Historic Moments in the Civil Rights Movement…

On the America in the King Years trilogy: “Right out of the pages of our lives….Compelling portraits placed in the excitement of a period when oppressed and powerless people moving together changed themselves and their country profoundly and permanently.”

On the America in the King Years trilogy: “In remarkable, meticulous detail, Branch provides us with the most complex and unsentimental version of King and his times yet produced.”

On the America in the King Years trilogy: “There will be the inevitable comparisons to Carl Sandburg’s Abraham Lincoln and Shelby Foote’s The Civil War, two other masterworks that use the grand sweep of history to lay barethe nation’s soul.”

“Instead of getting a dry dates-and-events history book, readers are gifted with glimpses of life and ‘historically significant’ events, presented almost in the form of a novel.”
or
Not Currently Available for Direct Purchase
Copyright © 2020 American Booksellers Association