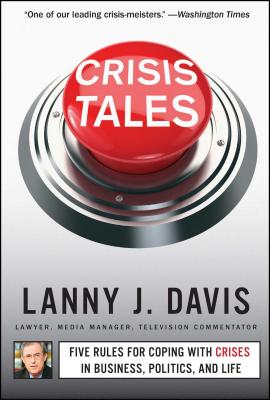 Five Rules for Coping with Crises in Business, Politics, and Life

Damaging stories and rumors can go viral in an instant—now, the nation’s premier political spin doctor teaches you how to cope with disasters in business, politics, and life by telling it all, telling it early, and telling it yourself.

TELL IT ALL, TELL IT EARLY, TELL IT YOURSELF

These days, every scandal is tried in the court of public opinion.

Political insider and legal crisis manager Lanny Davis has spent years helping politicians, sports figures, business executives, and corporations—including Bill Clinton, Martha Stewart, Washington Redskins owner Dan Snyder, and Macy’s, to name a few—through the biggest reputation crises of our times. In this fascinating and practical resource, Davis tells the real stories behind his famous clients’ very public scandals and how each case has aided him in the creation of five invaluable rules that absolutely anyone can use to protect himself.

Damaging falsehoods can go viral in an instant. The nation’s premier political spin doctor will teach you how to fight back.

Lanny J. Davis is a lawyer who counsels individuals, corporations, and others on crisis management and legal issues. He served as special counsel to President Bill Clinton and was a spokesperson for the president and the White House on matters concerning campaign finance investigations and other legal issues. In 2005 President George W. Bush appointed Davis to serve on the five-member Privacy and Civil Liberties Oversight Board, created by the U.S. Congress as part of the 2005 Intelligence Reform Act. He graduated from Yale Law School, where he won the prestigious Thurman Arnold Moot Court prize and served on the Yale Law Journal. He is the author of The Unmaking of the President 2016.
or
Not Currently Available for Direct Purchase
Copyright © 2020 American Booksellers Association