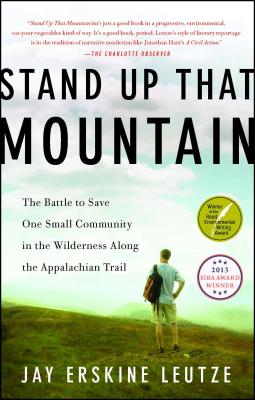 Stand Up That Mountain

In the tradition of A Civil Action—this true story of a North Carolina outdoorsman who teams up with his Appalachian neighbors to save treasured land from being destroyed will “make you want to head for the mountains” (Raleigh News & Observer).

LIVING ALONE IN HIS WOODED MOUNTAIN RETREAT, Jay Leutze gets a call from a whip-smart fourteen-year-old, Ashley Cook, and her aunt, Ollie Cox, who say a local mining company is intent on tearing down Belview Mountain, the towering peak above their house. Ashley and her family, who live in a little spot known locally as Dog Town, are “mountain people,” with a way of life and speech unique to their home high in the Appalachians. They suspect the mining company is violating North Carolina’s mining law, and they want Jay, a nonpracticing attorney, to stop the destruction of the mountain. Jay, a devoted naturalist and fisherman, quickly decides to join their cause.

So begins the epic quest of “the Dog Town Bunch,” a battle that involves fiery public hearings, clandestine surveillance of the mine operator’s highly questionable activities, ferocious pressure on public officials, and high-stakes legal brinksmanship in the North Carolina court system. Jay helps assemble a talented group of environmental lawyers to contend with the well-funded attorneys protecting the mining company’s plan to dynamite Belview Mountain, which happens to sit next to the famous Appalachian Trail, the 2,184- mile national park that stretches from Maine to Georgia. As the mining company continues to level the forest and erect the gigantic crushing plant on the site, Jay’s group searches frantically for a way to stop an act of environmental desecration that will destroy a fragile wild place and mar the Appalachian Trail forever.

Jay Erskine Leutze was born in Virginia in 1964. He now lives in the Southern Appalachian mountains of North Carolina. Trained as an attorney, he has become a leading voice for state and federal conservation funding for investment in public lands. He is a Trustee for Southern Appalachian Highlands Conservancy, one of the nation’s most established land trusts.
Loading...
or support indie stores by buying on