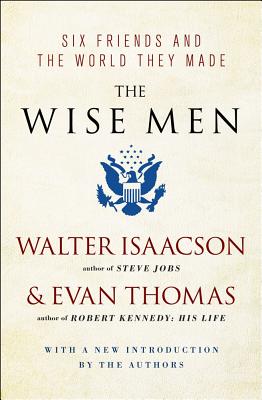 Six Friends and the World They Made

With a new Introduction by the authors, this is the classic account of the American statesmen who rebuilt the world after the catastrophe of World War II.

Six close friends shaped the role their country would play in the dangerous years following World War II. They were the original best and brightest, whose towering intellects, outsize personalities, and dramatic actions would bring order to the postwar chaos, and whose strong response to Soviet expansionism would leave a legacy that dominates American policy to this day.

In April 1945, they converged to advise an untutored new president, Harry Truman. They were Averell Harriman, the freewheeling diplomat and Roosevelt’s special envoy to Churchill and Stalin; Dean Acheson, the secretary of state who was more responsible for the Truman Doctrine than Truman and for the Marshall Plan than General Marshall; George Kennan, selfcast outsider and intellectual darling of the Washington elite; Robert Lovett, assistant secretary of war, undersecretary of state, and secretary of defense throughout the formative years of the Cold War; John McCloy, one of the nation’s most influential private citizens; and Charles Bohlen, adroit diplomat and ambassador to the Soviet Union.

Together they formulated a doctrine of Communist containment that was to be the foundation of American policy, and years later, when much of what they stood for appeared to be sinking in the mire of Vietnam, they were summoned for their steady counsel. It was then that they were dubbed “the Wise Men.” Working in an atmosphere of trust that in today’s Washington would seem quaint, they shaped a new world order that committed a once-reticent nation to defending freedom wherever it sought to flourish.

Praise For The Wise Men: Six Friends and the World They Made…

“A wealth of new information and insights on the people and events that shaped the first four decades of the Cold War.”

“Must be read if we are to understand the postwar world.”
— Robert A. Caro, author of Master of the Senate: The Years of Lyndon Johnson

“Isaacson and Thomas have fashioned a Cold War Plutarch.”

“A richly textured account of a class and of a historical period.”

Walter Isaacson, University Professor of History at Tulane, has been CEO of the Aspen Institute, chairman of CNN, and editor of Time magazine. He is the author of Leonardo da Vinci; The Innovators; Steve Jobs; Einstein: His Life and Universe; Benjamin Franklin: An American Life; and Kissinger: A Biography, and the coauthor of The Wise Men: Six Friends and the World They Made. Facebook: Walter Isaacson, Twitter: @WalterIsaacson

Evan Thomas is the author of The Very Best Men: Four Who Dared: The Early Years of the C.I.A.; Robert Kennedy: His Life; The War Lovers: Roosevelt, Lodge, Hearst and the Rush to Empire, 1989; Sea of Thunder: The Last Great Naval Command, 1941-1945; and John Paul Jones. His most recent book is Ike’s Bluff: President Eisenhower’s Secret Battle to Save the World.
Loading...
or
Not Currently Available for Direct Purchase