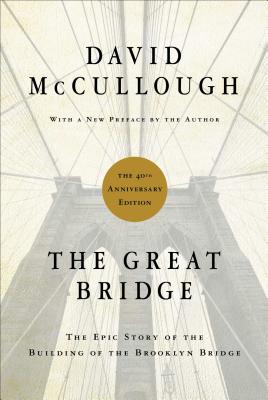 “The impact of the soaring structure upon the American imagination and American life has now been measured with sagacity and style by David McCullough. . . . The Great Bridge is a book so compelling and complete as to be a literary monument, one of the best books I have read in years. McCullough has written that sort of work which brings us to the human center of the past.”
—Robert Kirsch, Los Angeles Times

“The Great Bridge is a great book. . . . What David McCullough has written is a stupendous narrative about the building of the Brooklyn Bridge, with a cast of thousands (give or take 100), whose major characters come alive on the page as authentically, as creatively, as would their fictional counterparts if one had the imagination to dream up such a yarn. Once again, truth is not only stranger than fiction but a hell of a lot more entertaining. Get your hands on The Great Bridge. . . . This is the definitive book on the event. Do not wait for a better try: there won't be any.”
—Norman Rosten, Newsday

“David McCullough has taken a dramatic and colorful episode out of the American past and described it in such a way that he sheds fresh light on a whole era in American history.”
—Bruce Catton

“McCullough is one of our most gifted living writers.”
—Marie Arana, The Washington Post