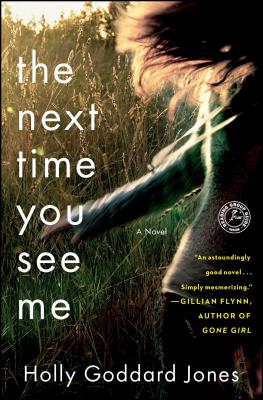 The Next Time You See Me

Hailed as “an astoundingly good novel” by Gillian Flynn, author of the #1 New York Times bestseller Gone Girl, and winner of the 2014 Kentucky Literary Award, The Next Time You See Me is a gripping tale of mystery, desperation, and redemption.

When a small Southern town’s most fiery single woman is found dead in the woods, it’s not just her secrets that threaten to surface. There’s Ronnie’s sister, Susanna, a dutiful but dissatisfied schoolteacher, mother, and wife; Tony, a failed baseball star turned detective; Emily, a socially awkward thirteen-year-old with a dark secret; and Wyatt, a factory worker tormented by a past he can’t change and by a love he doesn’t think he deserves.

Connected in ways they cannot begin to imagine, their stories converge in a violent climax that reveals not just the mystery of what happened to Ronnie, but all of their secret selves. Praised as “immensely satisfying and skillful” by Kate Atkinson, author of New York Times bestseller Life After Life, The Next Time You See Me is a debut novel not to be missed.

Praise For The Next Time You See Me: A Novel…

"Impressive . . . An eerie air hangs over the novel, but Ms. Jones has a talent for making even scenes apart from the central mystery feel suspenseful. She also has a precise eye and empathy to burn, bringing each of her many characters to well-rounded life.”
— New York Times

“The Next Time You See Me is an astoundingly good novel. Holly Goddard Jones writes with authority and a deep generosity about a large swath of humanity within a small town: Outsiders and insiders, middle-schoolers and the middle-aged, the violent and the violated, the lost and the found—and all those in between. The result is simply mesmerizing.”
— Gillian Flynn, author of Gone Girl

“So rich in character. I loved the subtlety and complexity of Wyatt and Sarah, and of course, Susanna, the whole thing woven deftly together with a light hand. An immensely satisfying and skillful debut novel."
— Kate Atkinson, author of Life After Life

"If you're yearning for a genre-defying novel filled with mystery and suspicion, who better to provide a recommendation than author Gillian Flynn, whose wonderfully bizarre Gone Girl also defies categorization. She calls The Next Time You See Me ‘simply mesmerizing.’ . . . What this novel does is align and then intertwine the lives of these characters, fascinating us with their psyches and, let's face it, sad and sorry lives. . . . Their stories aren't pretty, but Jones lays them out in a beautifully articulate way.”
— USA Today (3 1/2 stars)

“Have you turned the last pages of Gillian Flynn's Gone Girl and don't know what to pick up next? Try Holly Goddard Jones' debut novel, The Next Time You See Me, which Flynn herself has called ‘simply mesmerizing.’ . . . Like Flynn, [Jones] not only creates young women with troubles, she also vividly depicts a part of the country often obscured from view.”
— Chicago Tribune

“A densely populated literary thriller … as suspenseful as any mystery … in which the worst that could happen might even be for the best.”
— Atlanta Journal-Constitution

“The Next Time You See Me will no doubt be compared to Russell Banks’ The Sweet Hereafter. . . . Yet, because of the depth of characterization and literary skill, Holly Goddard Jones’ novel would better be compared to Dennis Lehane’s Mystic River, which is probably one of the best literary mysteries of the past few decades. . . . Those who prefer mature, well-written and intelligent literary fiction with just a dash of mystery would be advised to read The Next Time You See Me.”
— Roanoke Times

“A suspenseful literary ride . . . Jones’ storytelling draws you in quickly. . . . [She] does a fantastic job of building each character to the point that you can see them in your mind’s eye, flaws and all. . . . Jones’ debut novel will be added to the list of great North Carolina works.”
— Herald Tribune (Durham, NC)

“A novel with deeply sympathetic characters in situations that leap off the page . . . Her intimate understanding of the back roads of Southern culture provides a compelling foundation for a well of tales built on familiar themes but interpreted anew. However frankly sad her fiction is, it’s difficult to turn away from the world into which she’s invited us.”
— Raleigh News & Observer

"This first novel by award-winning Jones (Girl Trouble) is going to be hot. In the vein of Gone Girl, last summer’s runaway smash, Jones’s tightly written Southern thriller will be one of spring’s sizzling titles. Jones brilliantly weaves together story lines from unexpected angles. Her writing is fluid and she keeps a pace that will have readers lacing on their running shoes. And what a suspenseful, emotional, addictive run it is! Buy it now, read it now, share it now."
— Library Journal (starred review)

"Jones builds intense tension surrounding the choices her flawed but compellingly sympathetic characters make as they fight against lonely isolation within the tight confines of small-town America."
— Kirkus Reviews

“Jones’ well-crafted tale captures small-town nuances while exploring the individual psychologies of her characters and their struggles.”
— Booklist

“The Next Time You See Me gives readers all the pleasures of the best mystery novels as well as the finest literary fiction. No matter gender, age, or social class, Jones’s boundless empathy renders characters who are vivid, complex, utterly realized. She is an exceptionally talented writer.”
— Ron Rash, author of The Cove and Serena

“The lonely cast of outcasts in The Next Time You See Me has enough heartache for a whole jukebox full of country songs. Holly Goddard Jones spins a tight if heartbreaking tale, always keeping the reader leaning forward."
— Stewart O’Nan, author of Songs for the Missing

Holly Goddard Jones is the author of the short story collection Girl Trouble. Her work has appeared in The Best American Mystery Stories, New Stories from the South, Tin House magazine, and elsewhere. She was a 2013 recipient of The Fellowship of Southern Writers’ Hillsdale Prize for Excellence in Fiction and a 2007 recipient of a Rona Jaffe Foundation Writers’ Award. She teaches in the creative writing program at the University of North Carolina at Greensboro and lives in Greensboro with her husband, Brandon, and two rowdy dogs. Visit HollyGoddardJones.com.
Loading...
or support indie stores by buying on