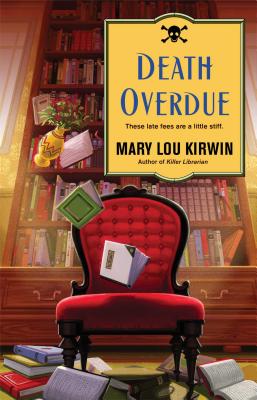 In the second novel in the “engaging” (Booklist) cozy library mystery series, Karen must work to clear her beau’s name after his ex-girlfriend is killed by a falling bookshelf while staying at his inn.

The Case of the Killer Case?

Ropes, revolvers, daggers, arsenic. . . . They are the classic, go-to murder weapons, from Christie to Clue. But death by bookcase? With one good shove, a crafty killer can keep investigators guessing: did it fall or was it pushed? That’s what sassy Midwestern librarian Karen Nash must determine—and if so, who did the pushing—when an avalanche of books and splintered wood fatally flattens Sally Burroughs, the ex-girlfriend of Karen’s squeeze, London B&B proprietor Caldwell Perkins, who appears the most likely suspect for murder. In the library. With the bookcase.

And maybe he has grounds? Just as he and his librarian love are making a go of opening their dream bookstore (that’s bookshop, in British English), Sally pops up years after abandoning him, to demand her share of the B&B’s sale. To Karen’s orderly mind, sorting her jumbled feelings about uprooting her life in Minnesota and taking a chance on Caldwell is much like sorting his four-thousand-three-hundred-and-twenty-four precious volumes: everything has its place. A little research reveals that more than one person may have had Sally issues, and Karen must prove that Caldwell is obsessed with books, not revenge. But will her hunt for a killer turn up too little, too late?

"A charming, low-key sequel...[the couple's] forays around London to find a bookstore space that is not too big and not too small evoke a fairy tale."
— Publishers Weekly

"Likeable characters and smoothly flowing plot make this a delight to read. Book lovers will like the setting and the plot. Other cozy lovers will, also."
— Book Dilettante

"Talented author Mary Lou Kirwin has created a seductive cozy mystery series with Karen Nash, Librarian-Sleuth. Death Overdue is the second book in this delightful series and is totally entertaining. Familiar characters return with another enigmatic problem to be resolved, keeping readers on their toes until the astonishing ending."
— Single Titles

"An enjoyable cozy mystery...I look forward to reading the next in the series."
— Reviewing the Evidence

"How can you not buy this cozy debut with its catchy title?  Kirwin succeeds at creating a winning heroine whose amateur sleuthing efforts make for a fun, gentle puzzler with a touch of love."
— Library Journal

"This engaging cozy has it all—English bookshops, flower shows, dotty sisters, plenty of surprises—along with an engaging premise for a continuing series."
— Booklist

Mary Lou Kirwin has lived in France, Belgium, England, and New York City. She now lives a quiet life in the wilds of Minnesota and Wisconsin. She feels she owes a great deal to all the librarians in her life—for handing her the right book at the right time.
Loading...
or
Not Currently Available for Direct Purchase