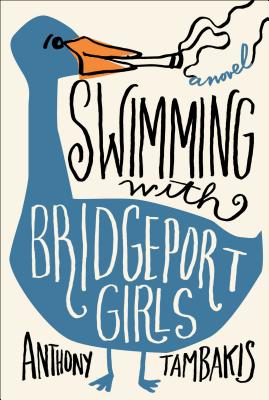 If a Richard Russo protagonist went on a bender in Vegas, the result would be something like Swimming with Bridgeport Girls: an uproarious romp about a lovesick gambler and his against-all-odds quest to win back his ex-wife.

Ray Parisi is in trouble. Fired from his anchor job at ESPN after one too many public humiliations, he is holed up in a motel and in desperate need of a break. His ex-wife is shacking up with another guy in his old house, a Cambodian bookie wants to kill him, and he’s wanted by the New York State Police. A few days before the Fourth of July, he unexpectedly receives an inheritance from his long-lost father, and it seems like all of his problems might be solved. Determined to get his life back together, Ray hatches an imaginative but highly suspect plan to win back his wife, dashing from Connecticut to Las Vegas to Memphis in an attempt to secure his future before the past runs him down. The cast of characters he meets along the way is as loveable as it is absolutely insane.

Sure to please fans of sophisticated romantic comedies like Seating Arrangements and Silver Linings Playbook, Swimming with Bridgeport Girls is a hilarious, heart-wrenching, and unexpectedly powerful tale about one man’s mission to—against all odds—finally get it right.

Anthony Tambakis is the recipient of the Paul Bowles Fellowship for fiction writing and a renowned screenwriter. He is currently adapting the 1961 novel and film The Hustler for Broadway and penning the screenplay for Swimming with Bridgeport Girls, his first novel. A native of Fairfield, Connecticut, Tambakis lives in Venice, California.

Praise For Swimming with Bridgeport Girls: A Novel…

“Ray Parisi is making a spectacular mess of his life. . . . Tambakis keeps the humor from getting too broad and Ray from getting too sympathetic, though the reader usually roots for him anyway. His final confrontation with [his ex-wife] feels messy but true, just like a good Springsteen song. If this were a Springsteen album, it would be Devils & Dust: partly set in Las Vegas, it evinces hope and humor but is dark and gritty at its core.” —Kirkus Reviews

“Ray Parisi is an unforgettable character. His story demonstrates the terrible compatibility between the faith and idealism required for gambling, and the faith and idealism required for love. Anthony Tambakis’s Swimming with Bridgeport Girls brings its reader along on an incredible journey from casino to casino making the romantic impulses of a gambler feel like one’s own.” —Natalie Portman, Academy Award–winning actress

“This is the funniest book I’ve read in a long time—a bighearted story about one man’s quest to save his ruined marriage. Ray Parisi makes one terrible decision after another, but I never stopped cheering for him.” —Jason Rekulak, author of The Impossible Fortress
or
Not Currently Available for Direct Purchase
Copyright © 2020 American Booksellers Association