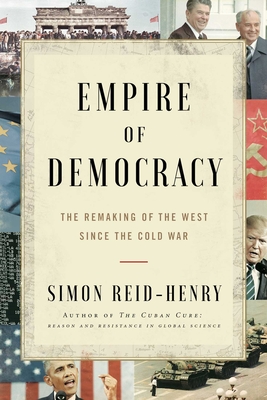 The Remaking of the West Since the Cold War

The first panoramic history of the Western world from the 1970s to the present day—from the Cold War to the 2008 financial crisis and wars in the Middle East—Empire of Democracy is “a superbly informed and riveting historical analysis of our contemporary era” (Charles S. Maier, Harvard University).

Half a century ago, at the height of the Cold War and amidst a world economic crisis, the Western democracies were forced to undergo a profound transformation. Against what some saw as a full-scale “crisis of democracy”—with race riots, anti-Vietnam marches and a wave of worker discontent sowing crisis from one nation to the next—a new political-economic order was devised and the postwar social contract was torn up and written anew.

In this epic narrative of the events that have shaped our own times, Simon Reid-Henry shows how liberal democracy, and western history with it, was profoundly reimagined when the postwar Golden Age ended. As the institutions of liberal rule were reinvented, a new generation of politicians emerged: Thatcher, Reagan, Mitterrand, Kohl. The late twentieth century heyday they oversaw carried the Western democracies triumphantly to victory in the Cold War and into the economic boom of the 1990s. But equally it led them into the fiasco of Iraq, to the high drama of the financial crisis in 2007/8, and ultimately to the anti-liberal surge of our own times.

The present crisis of liberalism is leading us toward as yet unscripted decades. The era we have all been living through is closing out, and democracy is turning on its axis once again. “Brilliantly, Reid-Henry calls for the salvation of democracy from the choices of its own leaders if it is to survive” (Samuel Moyn, Yale University).

Praise For Empire of Democracy: The Remaking of the West Since the Cold War…

"Simon Reid-Henry has written a superbly informed and riveting historical analysis of our contemporary era, which opened in the 1970s and, as he brilliantly demonstrates, continues to transform the premises of Western democracies.” —Charles S. Maier, Harvard University

“Exploding the myth that current troubles are due to an attack by malignant outsiders on a 'liberal order' crafted in 1945, Simon Reid-Henry shows that our current travails make sense as part of the self-conscious turn by mainstream elites to a neoliberal understanding of democracy in the 1970s — and the intensification of their mistake after the fall of communism in the 1990s. Brilliantly, Reid-Henry calls for the salvation of democracy from the choices of its own leaders if it is to survive.” —Samuel Moyn, Yale University

“[A] colossal history of the last half-century.” —Sunday Times

“A monumental and nuanced history of the past half-century.” —Irish Times

Simon Reid-Henry is a writer and prize-winning scholar. He is Associate Professor at Queen Mary, University of London and a Senior Researcher at the Peace Research Institute, Oslo.
Loading...
or support indie stores by buying on