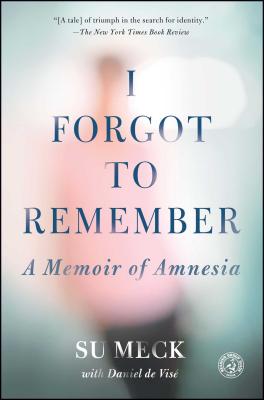 I Forgot to Remember

A Memoir of Amnesia

The courageous memoir of a woman who was robbed of all her memories by a traumatic brain injury—and her more than twenty-five-year struggle to reclaim her life: “[A tale] of triumph in the search for identity” (The New York Times Book Review).

In 1988, Su Meck was twenty-two and married with two children when a ceiling fan fell and struck her on the head, erasing all her memories of her life. Although her body healed rapidly, her memories never returned. After just three weeks in the hospital, her physicians released Su and she returned home to take care of her two toddlers. What would you do if you lost your past?

Adrift in a world about which she understood almost nothing, Su became an adept mimic, gradually creating routines and rituals that sheltered her and her family from the near-daily threat of disaster—or so she thought. Though Su would eventually relearn to tie her shoes, cook a meal, read, and write, nearly twenty years would pass before a series of personally devastating events shattered the “normal” life she had worked so hard to build, and she realized that she would have to grow up all over again.

In her own indelible voice, Su offers a unique view from the inside of a terrible injury as she “recounts her grueling climb back to normalcy…in this heart-wrenching true story” (O, The Oprah Magazine). Piercing, heartbreaking, but finally uplifting, I Forgot to Remember is the story of a woman determined to live life on her own terms.

Praise For I Forgot to Remember: A Memoir of Amnesia…

“Meck’s matter-of-fact delivery makes the harrowing details of her ordeal stand out all the more. . . . [A] tale of triumph in the search for identity.”
— The New York Times Book Review

"The author recounts her grueling climb back to normalcy after an accident robs her of her memory and sense of self in this heartwrenching true story."
— O, the Oprah Magazine

“[Meck] pieces together a fascinating tale of life after suffering head trauma as a young mother.”
— New York Review of Books

“A remarkable memoir . . . unnervingly honest, straightforward to a degree that makes every other memoir I’ve read seem evasive, self-conscious, and preening. . . . Unlike that of everyone else around her, [Su Meck’s] adult life wasn’t the result of imagining a happy future, pursuing it with a sense of purpose and then figuring out whether or not her dreams have been fulfilled, betrayed, or misbegotten. Her life was simply ‘the way things were’—until, that is, she realized she was in a position to have some say about that. And seeing her seize that opportunity makes for a happier ending than any fairy tale can offer.”
— Salon.com

“The true story of a woman who at the age of 22 was whacked by a ceiling fan and lost her memory . . . Quite the tale.”
— New York Daily News

“I Forgot to Remember, which was written with the elegant assistance of a Pulitzer prize-winning journalist, is more than a memoir or report on the devastating effects of traumatic brain injury. It is a shocking story about betrayal and trust . . . astounding.”
— Maclean's

"Remarkable . . . an arresting story about what it's like to live with amnesia."
— The Hampshire Gazette

“Thoroughly fascinating…There are many conditions and diseases that remain hidden this way. This book is a great way to get a glimpse behind that curtain and gain a greater sense of understanding and compassion.”
— Gering Citizen

“Best to have a box of tissues on standby for this one.”
— LAMag.com

“Su Meck has made the unimaginable tangible, and we are fortunate to have gotten the chance to know her as she journeys through her own introduction to herself.”
— Bustle.com

“In this remarkable memoir, Meck chronicles her experiences as she learned to live in ‘a house full of strangers’ . . . . Compelling and inspirational and, one hopes, an important impetus for ongoing brain research.”
— Booklist, starred review

“Compelling . . . Meck relates with excruciating honesty her journey out of oblivion.”
— Publishers Weekly (Books of the Week pick)

"A brave testament of willpower and perseverance against almost insurmountable odd."
— ShelfAwareness.com

“Su’s story has given us all pause to consider just how much we don’t know about the brain and its injuries.”
— Bookreporter.com

"Following a traumatic brain injury that erases every memory from her past, Su Meck takes us on her remarkable journey forward as she stitches her identity back together one thread at a time. A fascinating memoir about resilience, courage, and hope, I Forgot to Remember is not just a survivor's story. This is a hero's story."
— Lisa Genova, New York Times bestselling author of Love Anthony

"One ordinary day, Su Meck lost her memory. This is the highly unusual story of how she remembered herself—and reconciled the person she was with the world around her. Her story will surprise and engage anyone who has wondered about the role that memory plays in all of our lives."
— Alexandra Horowitz, author of the New York Times bestseller Inside of a Dog

"I Forgot to Remember is a brave and raw story about the damage and trials a head injury can inflict on an entire family. Su Meck's spellbinding tale of life, injury and then the arduous task of re-learning everything, even down to how to love again, reminds us all of the importance of living in the moment and the need to cherish the memories we own."
— Lee Woodruff, coauthor of the #1 bestseller In an Instant

Su Meck recently graduated from Smith College with a Bachelor’s of Arts in Music, in addition to a Book Studies Concentration. Su’s written work has also appeared in The New York Times Magazine. She and her husband, Jim, currently live in Northampton, Massachusetts, with their two Lab rescue dogs, Fern and Farley, and their two tuxedo cats, Apollo and Athena. They have three grown children, Benjamin, Patrick, and Kassidy.

Daniel de Visé is an author and journalist who has worked at The Washington Post, The Miami Herald, and three other newspapers in a twenty-four-year career. His investigative reporting has twice led to the release of wrongly convicted men from life imprisonment; he shared a 2001 Pulitzer Prize. A graduate of Wesleyan and Northwestern universities, de Visé lives with his wife and children in Maryland. He is the author of I Forgot to Remember (with Su Meck) and Andy and Don.
Loading...
or
Not Currently Available for Direct Purchase