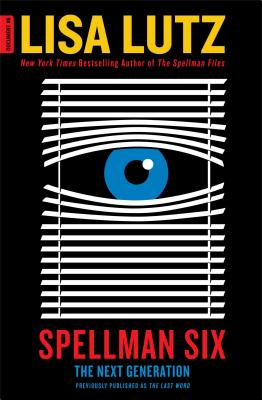 
ISABEL SPELLMAN, PI, is used to being followed, extorted, and questioned—all occupational hazards of working at her fami-ly’s firm, Spellman Investigations. Her little sister, Rae, once tailed Izzy for weeks on end to discover the identity of Izzy’s boyfriend. Her mother, Olivia, once blackmailed Izzy with photographic evidence of Prom Night 1994. After years of power struggles, Izzy staged a hostile takeover of the company. She should have known better than to think she could put such shenanigans behind her.

When Izzy is accused of embezzling from a former client, her troubles are just begin­ning. If Izzy gets indicted, she could lose her PI license and the Spellman family’s liveli­hood—not to mention her own freedom. Is this the end of Izzy Spellman, PI?

Spellman Six: The Next Generation is, hands down, the most powerful book in the best­selling, award-nominated Spellman series.

Praise For Spellman Six: The Next Generation…

“The sly trick of Lisa Lutz’s Spellman novels is that they’re so funny and so smart that you’re taken by surprise by all the insights they offer---about loneliness, about the tumult of love and most of all about the tender chaos of families. Like Raymond Chandler-meets-Salinger’s Glass family, with [Spellman Six], Lutz offers her richest, funniest and most bittersweet Spellman tale to date.”
— Megan Abbott, author of THE END OF EVERYTHING and DARE ME

"Lisa Lutz has a delightful knack for being able to combine humor and drama without letting one minimize the impact of the other…If you like your mysteries served up with a generous helping of humor, both subtle and silly, then you are sure to enjoy Lutz's award-winning series.”
— Bookreporter.com

“In the end, good and quirky beats bad and twisted. For a sixth time, Lisa Lutz has made the finding out how so much marvelous fun.”
— Baton-Rouge Advocate

“[Spellman Six] will make you laugh, it’ll make you cry, and it’ll make you feel wiser for having read it. It’s the kind of book you should play hooky to read so that you can savor it in solitude while drinking booze and/or eating ice cream in your pajamas. It’s the kind of book you fall in love with on page one and hope will never end, and if you know what’s good for you, you’ll go out and buy yourself a copy right now.”
— Crimespree Magazine

“5 out of 5. I devoured this book in less than 24 hours – it’s hilarious, touching, and the strongest installment of the series to boot. “
— RagingBiblioholism.com

“Along with its humor, this novel has its share of melancholy, with a surprising and bittersweet ending that nevertheless feels right. Izzy may find it hard to grow up, but Lutz's writing is maturing just fine.”
— Self Awareness for Readers

Praise for THE TRAIL OF THE SPELLMANS

“Private investigator Isabel ‘Izzy’ Spellman is not your typical gumshoe…irreverent… amusing…[Trail of the Spellmans is] a wise (and wise-cracking) choice for mystery readers.”
— Booklist

“Enormously humorous….Lisa Lutz has a distinct flair for comedy. She does an outstanding job introducing fresh and unforgettable characters while painting laugh-out-loud scenes.”
— Advocate Weekly

“Lisa Lutz's Spellman books are always hilarious, but Trail of the Spellmans reminded me how serious funny books can be. As precocious as the Spellman kids have always been, they're only now really coming of age and the result is, yes, hilarious, but also tender and melancholy and full of hard-won wisdom. This one's going to stay with readers for a long time.”
— Laura Lippman, award-winning author of over 15 books including the recent novel I'd Know You Anywhere and the Tess Monaghan series

Praise for THE SPELLMANS STRIKE AGAIN

“Lie back and enjoy this tale of intergenerational gumshoe mayhem.”
—Kirkus

“[Lutz] delivers another engaging blend of wisecracks and crime-solving.”
—Booklist

“Fans of comic mystery who haven’t already discovered the Spellman family series are going to want to read this book and then rush out for the other three. . . If you like Janet Evanovich, you are going to love the Spellmans.”
— The Globe and Mail

Praise for REVENGE OF THE SPELLMANS

“Izzy is off for another wild ride in Lisa Lutz's third madcap private-investigator novel. . . . Izzy's life . . . is so well documented—and she is such an endearing mess—that we want to find the evidence supporting her.”
—San Francisco Chronicle

“Amazingly, it all makes sense in the end, and Isabel and her quirky family are such good company that you won’t mind even when it doesn’t.”
—People Magazine (three stars out of four)

“The end of the Spellmans? Now that should have you on the edge of your seat.”
—New York Daily News

“Congratulations to Lisa Lutz, who has created the Spellmans, the most hilariously dysfunctional family since the Royal Tenenbaums. … Lutz’s style is refreshing and razor-sharp. . . . Revenge continues the good times in this wry, inimitable series.”
— Mystery Scene Magazine

Praise for CURSE OF THE SPELLMANS

“This is one of the best comic novels I've ever read, and that includes Carl Hiaasen and Janet Evanovich. The Spellmans—a collection of misfits whose family business is a private detective agency —are hilarious, smart and irresistible.”
—The Globe and Mail

“Fans of The Spellman Files will laugh just as loudly at the comic antics chronicled in this sparkling sequel.”
—Publishers Weekly (starred)

“The snappy, honest narration by Get Smart–obsessed Izzy keeps things popping, with its mix of trade talk and brutal honesty.”
— Kirkus

Praise for THE SPELLMAN FILES

“Move over, Carl Hiaasen…. The Spellman Files starts out funny and does not let up… Simply put, this tale of the Spellman family is irresistible, and you hate to see the romp end.”
--St. Louis Post-Dispatch

“Lutz is one smart-mouthed writer, but the genuine surprise of The Spellman Files is that it's almost as touching as it is funny.”
--New York Daily News

“[Isabel Spellman is] the love child of Dirty Harry and Harriet the Spy… It’s not the mystery of how these cases ultimately resolve that will pull readers through, but the whip-smart sass of the story’s heroine, ace detective of her own heart.”
--People

"Hilarious. My enjoyment of The Spellman Files was only slightly undercut by my irritation that I hadn't written it myself. The funniest book I've read in years!"
— Lauren Weisberger, author of The Devil Wears Prada and Chasing Harry Winston

Lisa Lutz is the author of the New York Times bestselling, Edgar Award– and Macavity Award–nominated, and Alex Award–winning Spellman Files series, as well as the novels How to Start a Fire, The Passenger, and The Swallows. She lives and works in upstate New York.
Loading...
or support indie stores by buying on